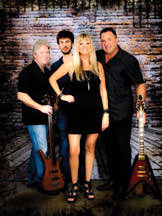 The second in the Summer 2019 Concert and Dinner Series has been enjoyed by the time you read this. Unfortunately, this article was submitted just before the concert. So, let’s make some assumptions.

First, it was popular and eagerly anticipated. Ticket sales were brisk and the concert was sold out. Second, a great mood was set with the Lemon Shot specials offered by the folks at the grill prior to dinner and the music. Third, the concert was great!

Redline Drift has established a reputation of being a polished and professional premier cover band. They play generation-defining music from the ’70s to present. They have a synergy developed through years of professional stage experience. Their offerings include Zeppelin to Gaga, Journey to Adele and Aerosmith to Bruno Mars.

An advanced peak at the proposed set list showed that the band intended to run the table. Their songs range from Johnny Cash (Folsom Prison Blues) to Janis Joplin (Me and Bobby McGee) to Stevie Ray Vaughn (House is Rockin’) to Maroon 5 (Harder to Breathe). They agreed to do a third set if the crowd wished, and I hope you all made them stay!

The series continues August 17, with the Double Vision Foreigner Experience. Ticket sales have been brisk from the first day they were offered. Now I’m not playing Head Games with you or trying to be Cold As Ice when I tell you that if you Want To Know What Love Is it is Urgent for you to show that you are Hot Blooded and be a Juke Box Hero and Say You Will get tickets for this show. I’m sure it will Feel Like the First Time you heard these classic favorites.

Again, thanks to Shelbi Berg and Jeremy Trietsch for helping make this happen. And kudos to Executive Producer Darryl Williams and Roadies Tom Doty, Stan Brein and Mike Bittiga for their continued efforts to turn Robson into a School of Rock!

Look for the upcoming Epic Unplugged concert on September 14.