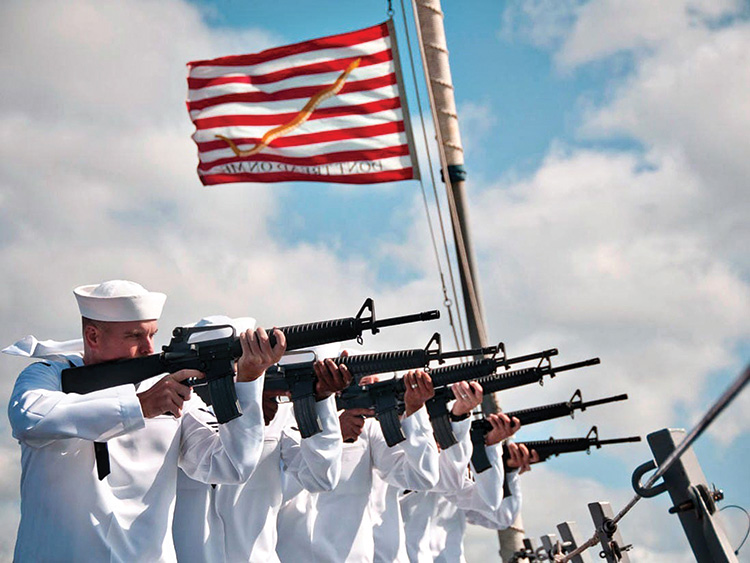 Military life and ceremonies are steeped in tradition and symbolism. One of the best-known military traditions is the 21-gun salute, but few know the meaning behind it and the traditions that sparked it.

The tradition of rendering a salute by cannon originated in the 14th Century as firearms and cannons came into use. Originally warships fired seven-gun salutes—the number seven probably selected because of its astrological and Biblical significance. Seven planets had been identified and the Bible states that God rested on the seventh day after Creation. Land batteries, having a greater supply of gunpowder, were able to fire three guns for every shot fired afloat, hence the salute by shore batteries was 21 guns. The multiple of three probably was chosen because of the mystical significance of the number three in many ancient civilizations. As gunpowder improved, ships at sea adopted the 21-gun salute.

The 21-gun salute became the highest honor a nation could render. Varying customs among the maritime powers led to confusion in saluting and return of salutes. Great Britain, the world’s preeminent seapower, had the Royal Navy prescribe it in 1730 for anniversary dates. Eventually, by agreement, the international salute was established at 21-guns, although the United States did not agree on this procedure until August 1875.

The gun salute system of the United States has changed considerably over the years. In 1810, the “national salute” was defined by the War Department as equal to the number of states in the Union, at that time 17. In 1842, the presidential salute was formally established at 21 guns. Today, the national salute of 21 guns is fired in honor of a national flag, the sovereign or chief of state of a foreign nation, a member of a reigning royal family, and the president, former president, and president-elect of the United States. It is also fired at noon of the day of the funeral of a president, former president, or resident-elect.

The 21-gun salute is often confused with the symbolic act of firing three volleys at military funerals, but these are two completely different rituals. The 21-gun salute is, as the name states, a salute (an expression of welcome, goodwill, or respect), and in that context the word “gun” refers to naval guns or artillery pieces (typically cannons), not firearms. The firing of three (rifle) volleys at military funerals is not a salute but a funeral custom. The three volleys come from an old battlefield custom. The two warring sides would cease hostilities to clear their dead and wounded. Once casualties were properly cared for, the battle would resume. The military funeral flag detail often slips three shell casings into the folded flag before presenting the flag to the family. Each casing represents one volley.