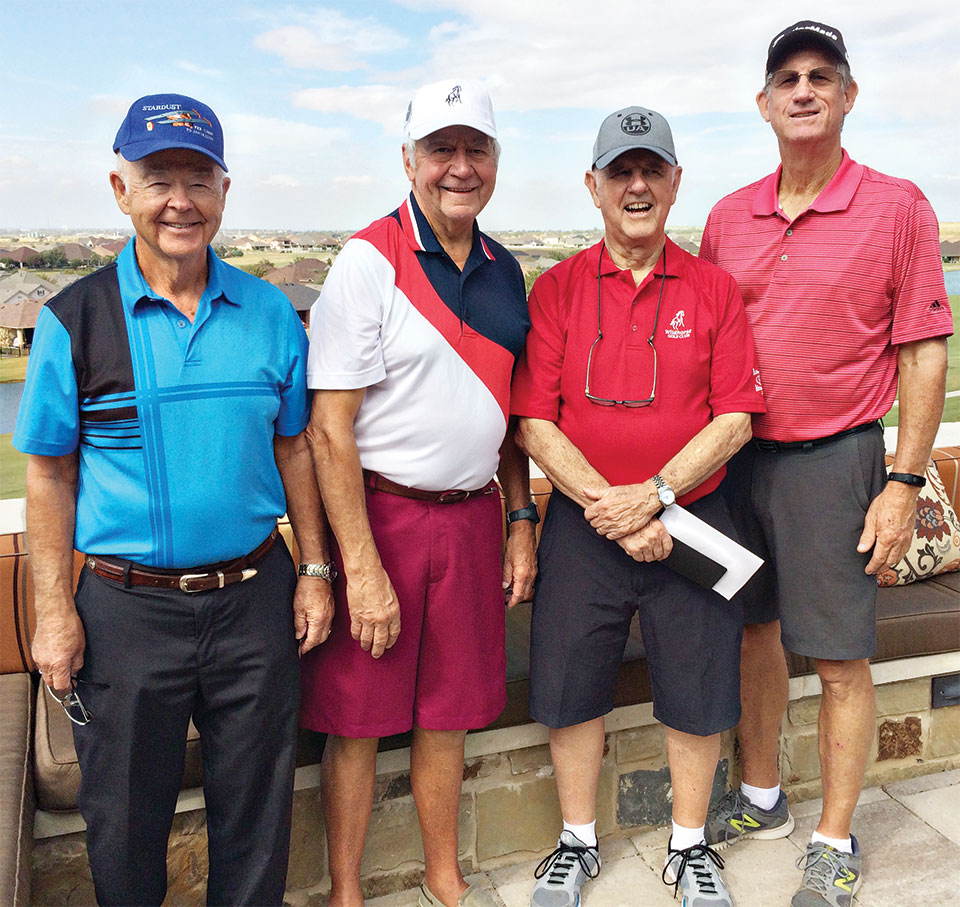 What do Simon & Garfunkel, the Grateful Dead, the Beatles, Elton John, Eric Burdon and the Animals and Queen have in common with 9MGA golfers? A whole lot, it seems.

First, our 2017 plaque of Appreciation award to RR 9MGA outgoing president, Wesson (Wes) Gage. What better blast from the past pays tribute to this gentle man, quiet leader and his easy-going departure as board president than Simon & Garfunkel’s classic Slip Sliding Away. Think about it—Wesson Oil and slipping away. Get it? The song’s refrain sure does “slip sliding away, slip sliding away, you know the nearer your destination the more you’re slip sliding away.”

Next there’s the recent election of our new Board for the upcoming 2018 golf year. The new Board is comprised of four retired business executives who are readily recognizable Wildhorse Golf Club regulars, each classily memorialized in rock music. Don’t believe me? Read on.

First, there’s Tom Prohaska, our new board president, who spent his career at Mack Trucks, celebrated by The Grateful Dead in their tome Truckin. Remember the lyrics? “Sometimes the light’s all shinin’ on me, other times I can barely see. Lately it occurs to me what a long, strange trip it’s been.” Now doesn’t that remind you of Tom? Especially in light of all of Tom’s trips.

Then there’s Ron Schwertner who came to us from John Deere. Ron’s our new vice president (of all ciaos). At least that’s what his drives make onlookers think. What better tribute than the Beatles’ little ditty Dear Prudence. It may be spelled differently but the word and sentiment is the same. “Dear Prudence, won’t you come out to play; Dear Prudence, greet the brand new day, The sun is up, the sky is blue. It’s beautiful and so are you. Dear Prudence won’t you come out and play.” And boy does Ron play!

And how about our continuing treasurer Norm Leggett? He spent his career as a sky pilot for US Air, Piedmont and Braniff, obviously not all at the same time but in the sky none-the-less. Eric Burdon and the Animals’ standard Sky Pilot perfectly expresses Norm’s presence among us with the lyrics “He blesses the boys as they stand in line (to tee off), the smell of gun grease (golf balls) and the bayonets (golf clubs) they shine, he’s there to help them all that he can, to make them feel wanted he’s a good holy man.”

The fourth member of this motley board, Gregor Smith our new Secretary, nurtured his game (career or golf?) making serious contributions at Martin Marietta, the great American aerospace company. There Gregor was intimately involved in putting the USA’s unmanned space rover on Mars. So we’re honored to have our own Rocket Man, who Elton John celebrated in his song of the same name with the chorus “…and I think it’s gonna be a long, long time till touch down brings me round again to find I’m not the man they think I am at home, Oh no no no, I’m a rocket man, rocket man, burning out his fuse up here alone.” That’s Gregor, burning out his fuse on Wildhorse golf course.

The above member milestones conclude another genuinely fun and very satisfying year of Robson Ranch Denton Wildhorse Golf Club 9 hole golfing. Separately each member achievement is significant and worthy of acknowledgment. Combined they exemplify the fun and sporting growth experienced by 9MGA during 2017.