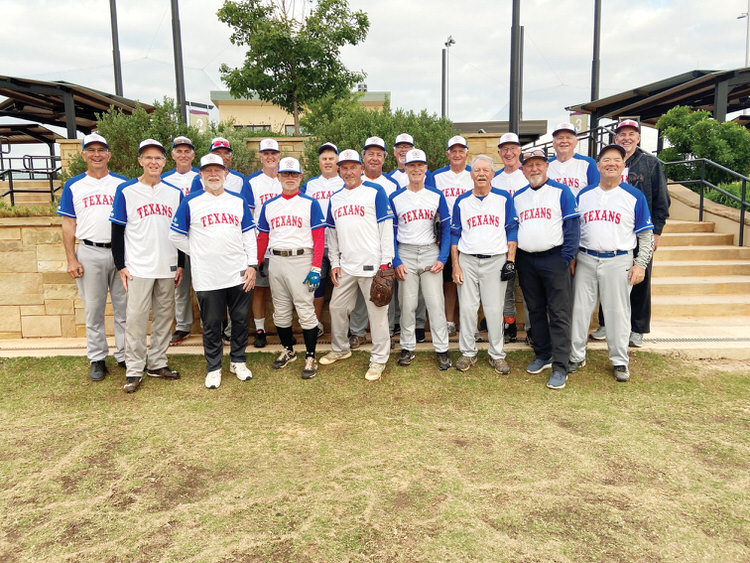 Robson Ranch age 70+ traveling softball team recently competed in the 2022 Texas State Championship in Grapevine, Texas. They were declared Champions of the 70 AA Division. Playing six games in two days against competition all rated higher, they beat the 65 AA Division champion and eliminated three of the five 70 AAA teams they faced. Well done, team, and congratulations!

Here is a summary on how they did it.

In their first game, they lost a nailbiter 24-25 to the Texas Rattlers of San Antonio. Carl Caruso pitched a great game, and the entire outfield played outstanding. Johnny Blecher hit a grand slam homerun, while Pat Powers, Ken Ford, Jerry Bennett, and Mick Calverley were perfect at the plate.

Their second game was equally high scoring, yielding a 22-20 victory over eventual 65 AA champions, the Electrifiers from Lubbock. Mick was on the mound, and Robson’s defense was tight, holding the Electrifiers to singles and getting force outs at second base. George Wendt, Carl, and Bob Laderach were all perfect at the plate in this game.

Game 3 of the first day was against the higher-seeded 70 AAA Patriots from Claremore, Okla. They battled against this superior foe, losing 18-11. David McKie, Ford Robertson, Powers, Clyde Ziegler, and Laderach all went 2 for 3.

After an evening of hot tubs, bourbons, and beers, Robson went to the ballpark the next morning, facing elimination but determined not to go home early.

First up: Scrap Iron, the Colorado 70 AAA champion. Jerry Bennett was perfect at the plate, while Laderach, McKie, Powers, and Ziegler were all 3 for 4. Defense was awesome. Mick stayed strong, and Robson took the victory 17-8.

Next up: AAA Relentless from Lakeway, Texas. Carl pitched, and Randy Brewer stepped up bigtime, going 4 for 4. Coach Gary Smith emphasizes defense, and it paid off again. Ken Cline stepped in at 1B for the injured John Thompson, digging several throws out of the dirt for outs while going 2-3. Clyde handled the “hot corner” at 3B, snagging several line shots, and Robson cruised to an easy victory, 23-12.

The stage was set, playing to advance to the championship game. Cline, Laderach, and Ziegler each batted 3 for 4. Defense again was superb: Cline snagged a shot down the first base line, touched first, throwing home for a sweet double play.

Having already knocked out 3 AAA teams and playing for a shot at the overall championship, Robson scored 5 in the 6th inning to tie the game up. But in the 7th, the Rattlers scored a run for a 21-20 victory, sending our team home.

What a tournament! The Robson crew represented our community well. Johnny B and Powers hit over .700, and McKie, Laderach, Bennett, Ziegler, and Brewer all hit over .600.

We left with our heads held high, looking forward to the next time we will represent Robson Ranch at the Texas Lone Star Championships in Waxahachie in June.