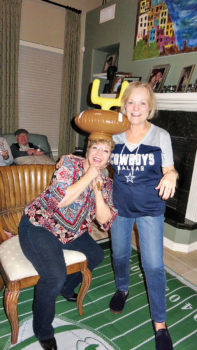 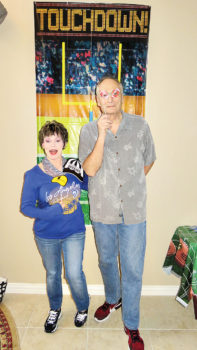 Terry and Mike Gilberti hosted a winning NFL Championship Party on game day. Dressed in their favorite team shirts, fans chose their football pool squares and rooted for their favorite team. We enjoyed a huge array of Game-Day party food and drink, all prepared by Terry Gilberti. Mary Bryant was the big football pool winner. A fun and jovial game of football toss was played.

Patriots toppled the Rams, 13-3 in the lowest-scoring Big Game ever. In spite of the low score, history was made. Patriots quarterback Tom Brady secured the sixth championship ring of his career and becomes the oldest to win a championship, passing the then 39-year-old Peyton Manning by two years. Bill Belichick also becomes the oldest coach to win, just a year older than Tom Coughlin who won at age 65. Patriots defensive backs Devin and Patrick McCourty became the first set of twins to ever play on the same team during the football championship game, regardless of the outcome.

Patriots wide receiver Julian Edelman won the MVP award after a ten-reception, 141-yard performance that saw him outplay the Rams offense in the first half.

New England is now in a tie with the Pittsburgh Steelers for the most titles all time.

What a great time everyone had conversing, munching and cheering for our favorite team at the Gilberti’s Big Game, Superb Owl Championship Sunday Playoff Party.