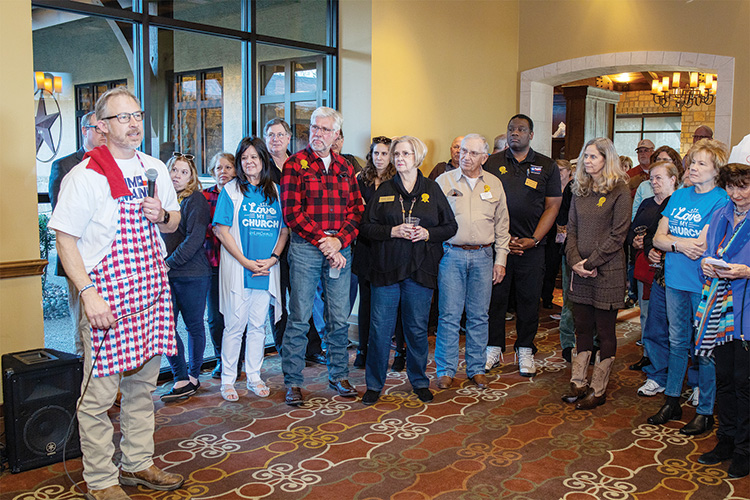 New Life Church, which meets in the Clubhouse on Sundays at 8:30 a.m., partnered with Robson Ranch’s Wildhorse Grill to hold the inaugural Brisket and Bean Cook-Off. Over 90 judges including four VIP judges made the monumental decision on who would win the 2020 titles. The VIPs were Robson’s very own County Commissioner Dianne Edmonson, Denton City Councilman Jessie Davis, Denton City Councilman now running for the position of Denton Mayor Gerard Hudspeth, and Representative Lynn Stucky.

There were eight brisket and ten bean chefs of which included New Life’s Pastor Jim Mann’s brisket entry named, “MannforDenton Brisket” and his wife, Christine’s, “Cowboy Beans”. However, when it was all tasted and scored the winners were…father and son team Jason and Dale Frazier with their entry named “Burnt Offering Brisket”.

And the 2020 Robson Ranch Bean Chef is Avanell Patton with her bean entry named “My mom’s beans.”

There were a lot of laughs with a lot of beans and beef. Thanks to all of the wonderful chefs, volunteers, tasting judges and everyone at the Wildhorse Grill. Keep cooking, we hope to do this again in 2021. But, in the meantime, get out your ice cream makers. Plans are already being made for the second Robson Ranch Homemade Ice Cream Contest sometime this spring.