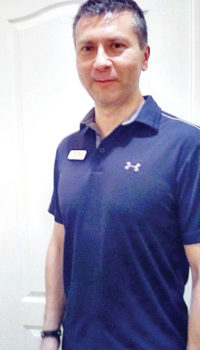 The Robson Ranch Catholic Club met on March 13 at the home of Dr. Alex and Irene Manning. The meeting was opened with a prayer.

President John Goodpaster said that he would not continue to be president of the Catholic Club in the fall and that we would have to elect a president and secretary. Irene Manning who has been secretary for the last four years, said that she would take over the presidency if someone would volunteer to be secretary. Brett Paxton nominated Irene Manning to be president and Kathy Sapp and Marion Napurano volunteered to co-chair the secretarial position. The positions were approved by the membership.

John Goodpaster introduced our guest speaker Mr. Wally Sagui. Mr Sagui explained how his family had moved from California to Texas when he was a child. Mr. Sagui is employed full time here at Robson Ranch as a physical trainer, a personal trainer and massage therapist. He explained how he works with and helps people suffering from Parkinson’s Disease using a therapy called Rock Steady Boxing, He also conducts classes in different physical activities. A number of our members had worked with Wally and had taken part in some of his classes. Everyone found his presentation very interesting and educational.

Because it was so close to St. Patrick’s Day we also celebrated the holiday with the wearing of the green. Members provided some wonderful refreshments which everyone really enjoyed. It turned out to be a fun evening.