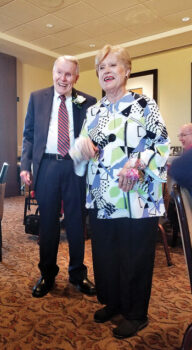 The Robson Ranch Catholic Club met on Tuesday, Oct. 12, in the Creative Arts and Technology Center (CATC). Many regular members were in attendance, and we were happy to welcome new members as well.

The meeting was called to order by President Irene Manning and began with all reciting the Memorare, which is a Catholic prayer seeking the intercession of the Blessed Virgin Mary. Irene then asked if there were any members of our community in need of prayers. Several names were mentioned, which Kathy Sapp noted and will be sending cards to.

Unfortunately, our speaker Diane Schwind, who was going to speak about Our Lady of Fatima and the famed apparitions reported in 1917 by three shepherd children at the Cova da Iria in Fátima, Portugal, became ill and was unable to attend. We hope to reschedule Diane at another meeting.

As always, our esteemed president, Irene Manning, rose to the occasion and gave a talk on Pro Life, which was very fitting, as October is “Respect Life Month.” Irene’s talk was very enlightening, and cards from Human Life International were handed out. The cards showed the actual size of a fetus at one, two, and three months. These cards also contained factual information regarding the development of the child from conception to 12 weeks.

Irene then told of her Catholic journey, beginning with a priest coming to her door when she was just a child and telling her parents that they needed to send their children to religious instruction. They did, and Irene’s love for her religious life grew and grew. As a young Air Force flight attendant, she met Alex, the love of her life, and although he was planning on becoming a priest, Irene, with the help of St. Jude, convinced Alex to marry her. The rest is history, and they have been happily married for over 60 years.

The next scheduled meeting will be Nov. 9 at 7 p.m. in the Bluebonnet room of the CATC. Our guest speaker will be Randy Bollig, executive director at Loreto House of Denton. Loreto House provides caring and compassionate services to women dealing with an unplanned pregnancy: pregnancy testing, sonograms, material goods assistance, referrals, and more. All services are free of charge. Please join us and learn more about the workings of this wonderful and caring organization.

Please be sure to mark your December calendars for our Christmas gathering, which will be held in the lounge at the Wildhorse Grill on Dec. 20.