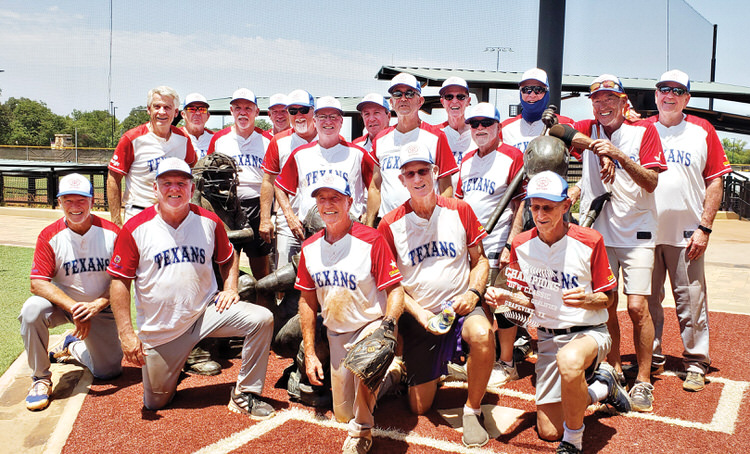 Early August, 2022, North Texas has recorded more than 41 days of consistent temperatures above 100 degrees F. But when I pass by the “Field of Dreams,” home to RR softball enthusiasts, a dedicated group of 65+ and 70+ men have been practicing several times a week. They practice batting, throwing, catching fly balls, pitching, and infield drills. These guys represent our RR community in senior AA softball tournaments, which take place around the State of Texas. They have even traveled to venues in neighboring states.

Both the 65+ and 70+ team players are our neighbors right here in our RR community. Most opposition teams they face in these “out of town” tournaments are pooled from local, regional, and even “out of state” talent. So, when our guys win, it’s really a big deal. So, congrats, RR traveling softball players, on winning the 2022 DFW Classic Championship held in Grapevine, Texas. Over the two-day tournament, the traveling team played a total of five games. On day one, they played three games and even beat a higher division AAA team. The second tournament day, the RR 65+ travelers had to play a best two out of three series, and they won the first two games, clinching the top spot!

The comradery among both RR traveling teams is so very special. Four 70+ players (Carl Caruso, David McKie, Jim Reese, and George Wendt) joined the 65+ team and played in the tournament. Having extra players at each of the five games permitted time to sit out a few innings and cool off in the dugout. Added 70+ supports were Kelly Petre, who manned coaching first base; Stan Isbel, who assisted in the dugout; and Johnny Blecher, who recorded the game scores and statistics. Dave Riddle, too young to play on either team, is a staunch team supporter who fills many roles, and in Grapevine, he managed the third base coaching duties.

Behind every success is a leader who steers the organization. Ron Schwertner is the 65+ traveling team manager who works hard all season long to facilitate participation of this team entering tournaments. The list would be too extensive to highlight all the “helpers” who work with Ron to change opportunities into tournament realities. Ron always takes a moment to send each player an email that summarizes each tournament completed. I conclude with Ron’s own words: “I really enjoyed playing softball with this great group of people. It’s been my pleasure to have served as manager for the 65+ traveling team. Thanks to everyone for allowing me to have this responsibility. Our season is over, but I’m already looking forward to next spring.”