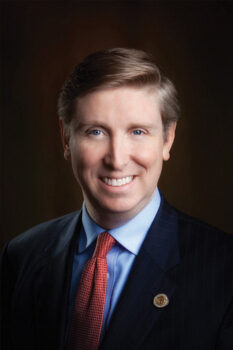 We Texans will have that change opportunity in early November of 2021 when eight constitutional amendments will be presented to the voters for approval or rejection. These proposed amendments deal with a myriad of topics, including the qualifications for district and higher-level judges, tax reductions for spouses of deceased military service members, counties rehabbing blighted roadways, etc. Some of us will struggle a bit to understand the legal language and the ramifications of each amendment.

So, should we change the Texas Constitution?

To help us each understand exactly what we will be voting on, the Robson Ranch Republican Club will present State Representatives Lynn Stucky and Tan Parker at our Wednesday, Oct. 6 meeting at 6:30 p.m. in the Clubhouse. They will also fill us in on the latest legislative news, including what will be happening in the coming weeks as the House has finally regained its MIA quorum.

A unique characteristic of our Texas Constitution is the ease of amending it. Proposed amendments must pass the Texas Legislature by a 2/3 vote in both the Senate and the House, and then be submitted to the voters for approval or rejection. The reason so many amendments are needed is that our state’s founders believed in very limited government and thus, no action can be taken by the state government unless specifically granted that power in our state Constitution. That has resulted in some rather strange amendments being considered, such as the 2007 amendment to do away with the statewide office of Inspector of Hides by Constitutional Amendment. Apparently, no one had held this office since 1990 and it passed with 76% of the vote.

The Texas Constitution is unique in many ways, one of which is its length. At 86,936 words long including amendments added to the original document, our state Constitution is second in length only to Alabama, with 388,882 words. Our document is a patchwork quilt of various additions (amendments) that have been approved and attached over the years. In fact, through the 2019 legislative session, 690 amendments have been proposed with 507 adopted. Only California and Alabama have more amendments to their state constitutions than does the Lone Star state.

Please come hear these two legislators present these eight proposed amendments in plain language and answer your questions about them. The election will be held right here at Robson Ranch, so it will be easy to vote once you’ve decided how you feel about each of these proposals.