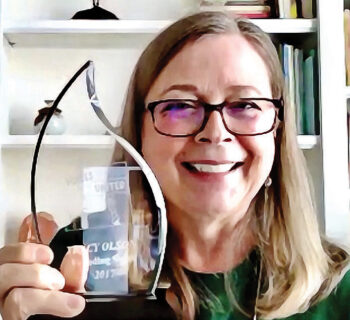 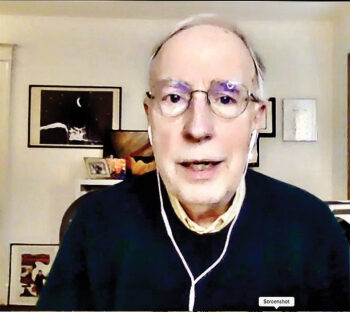 Much has been said on both sides of the political spectrum in print and on social media. Would your perspective change if you were able to hear it from an educated historical perspective? Voices United (VU) was honored to have guest speaker Daniel Balz, senior correspondent for the Washington Post, winner of numerous journalistic awards, and author of three books on U.S. elections.

During the business meeting, Voices recognized Tracy Olson for forming the service group after the Women’s March in Denton in 2017, and for her leadership as the organization has grown. We also had a report on generous donations made by our members to Meals on Wheels.

Next, Daniel Balz, speaking via Zoom from his home near Washington, DC, presented his view of the 2020 election as compared to past elections.

He said the 2020 election turnout was significant with the popular vote totaling more for Biden than any other president with a solid win built on narrow victories in some states. However, the outcome was not what the Democrats had hoped for down the ballot. They did not do as well in the House as they had hoped, and as of this time the Senate is still up for grabs. His analysis was that Biden’s win was a rejection of Trump, but not a clear affirmation of the Democratic party. He expressed concerns over the dissension by President Trump regarding election results and how that will affect voters for some time.

The second aspect of the election Mr. Balz discussed was the transition. The only hiccup for Biden so far was the short delay by the federal government allowing Biden’s team access to agency information and briefings.

He said Biden’s first issue is choosing a diverse cabinet as he has promised. Another transition item on Biden’s agenda is COVID-19. Much work will be required for a smooth vaccination plan.

In response to member questions, Mr. Balz gave opinions on other political matters, news media bias, and how journalism has changed during his 35 plus media years. The mainstream media, he said, still tries to present factual news. He also discussed concerns on the future of voter faith in our democratic institutions due to the controversy surrounding the election results.

Voices members gained much from such a knowledgeable journalist.

VU celebrated its last social event of 2020 via Zoom on Tuesday, Dec. 15. The call was hosted by Vicki Shoemaker and Susan Engstrom. Fifteen members enjoyed participating in an ugly sweater contest and holiday charades. All attendees voted on the ugliest sweater with first place going to Susan Engstrom. With respect to the holiday-themed charades, there were two teams (red and green). Needless to say, playing charades via Zoom proved to be a fun challenge. The two teams played to a tie.

Voices United is a women’s 501(c)(3) organization open to all residents of Robson Ranch. Visit our website at www.voicesunitedrr.org for more information.