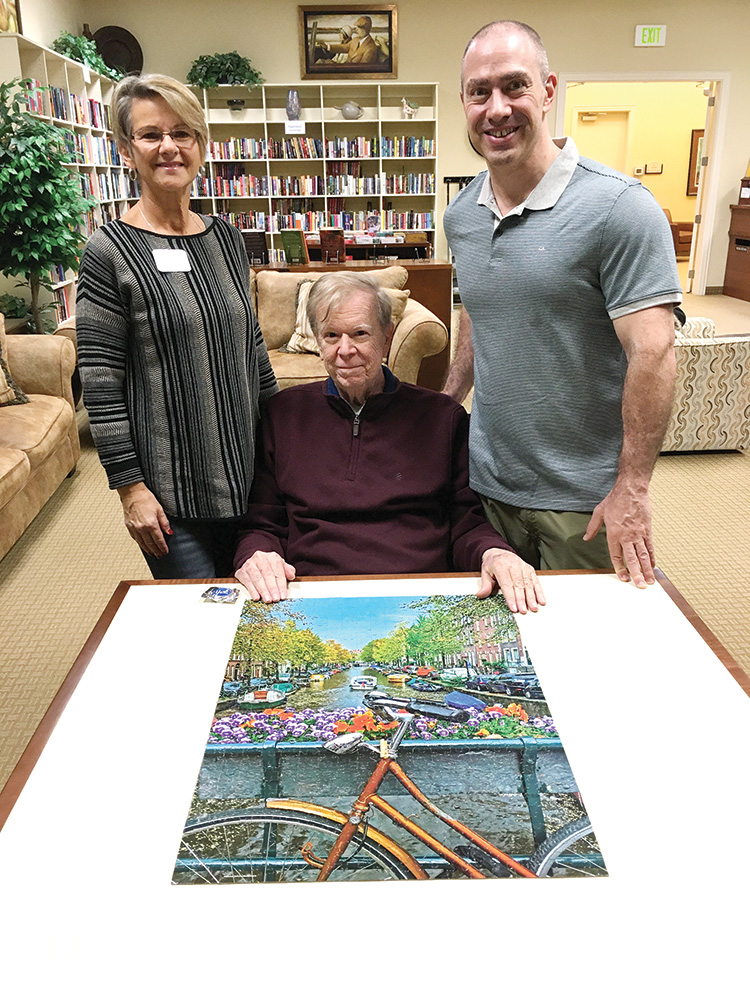 Our library has lots of beautiful puzzles. This one, featuring a canal in Amsterdam, was compiled by Suzanne Spisak, Ed Whelan, and Tom Sulzano at the Puzzle Palooza Contest in two hours and 29 minutes.

How fast can you put together a 500-piece jigsaw puzzle? Working as a team, Tricia, Kirk, and Mista Douglas completed one in just one hour and 29 minutes, which was the winning time in the Friends of the Library (FoL) Puzzle Palooza Contest.

Twelve teams of three participated in the contest held in the Robson Ranch Library on Friday and Saturday, Nov. 22 and 23. While the winners’ time was impressive, they were not the only teams to surprise the contest organizers. The team to come in second — Eileen Pierson, Suellen Self, and Charlene Norris — finished their puzzle in one hour and 38 minutes. Third place winners — Pat Beard and Betty and Klaus Dannenberg — took just eight minutes longer: one hour and 46 minutes. Two other teams were close in time: Esther Jung, John and Mark Fersch clocked in at two hours and three minutes, while P. Rea and Beverly and Alan Albarran were a mere two minutes behind them at two hours and five minutes! Two other teams also completed their puzzles in less than three hours. The longest time taken was four hours and 41 minutes.

The FoL committee who conceived, planned, and staffed the contest were Judy Field, Betty Gardner, Marti Harnly, Shirley McManus, Joan Pursley, and Rene Spirock. They received lots of positive feedback about the event, so look for future puzzle contests in the RR Library. And remember, there are usually one or two in-progress puzzles on tables there just waiting for someone to finish, as well as a slew of puzzles that you can check out to do at home.

The RR Library has a volunteer board and staff and all of its books, puzzles, magazines and DVDs have been donated by residents. FoL is an official club of RR and a non-profit, 501(c)(3) organization; dues are $10 per year. There is a box in the library for dues and suggestions on making our library and future puzzle contests even better. FoL dues and tax-exempt donations help provide special programs such as Puzzle Palooza and book discussions, as well as subscriptions to four daily newspapers. The next book discussion will be on Lonesome Dove, by Larry McMurtry. It will be held on Feb. 27 and, says Linda Bono (chairperson of FoL), “There’s a great panel of four to lead the discussion and western wear will be encouraged.”