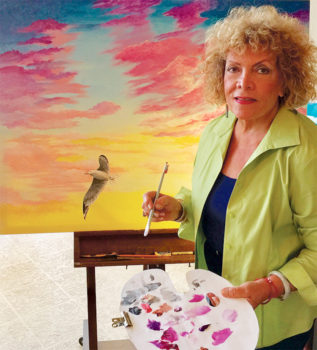 Understanding French Impressionism while enjoying fascinating facts about the artists

This class will concentrate on the major changes in the latter half of the nineteenth century through art and its movement in France and surrounding areas.

Francesca Romano will explain this revolutionary new force in painting and delight her audience with witty facts about the artists.

Francesca’s class is scheduled for Tuesday, November 5 at the Club House Heritage Room from 10 – 12 p.m. Remember, this is a FREE class. Please respond to Francesca directly to RSVP: [email protected] or  (940)271-0161.

About the artist and art historian

Francesca d’Atria Romano’s life as both an arts educator and fine artist has been very fulfilling. She is a 35-year veteran of the NYC high school system and in her later years she was an adjunct professor at St. John’s University, NYC and a docent at the Metropolitan Museum of Art, NYC.

Francesca has always volunteered her expertise in fundraising for many “not for profit” organizations.

As an artist Francesca has won over 150 awards and is proud to have her artwork collected by many patrons. Four pieces of her artwork are on permanent collection at the Staten Island Museum. The National Library of Congress also owns one of her etchings.

Francesca is most proud of her “Woman in History” status given to her by the New York State Assembly, 1989. She also became a “Woman of Achievement”, 1992. In addition, she received a Nova Award from PBS channel 13, NYC for a film documentary involving her high school students and a Tibetan Monk who created a “Mandala for New York City”.

She also had the honor to design the Staten Island Ferry Logo over 30 years ago. This image was mass produced onto many products that have now become collector’s items.