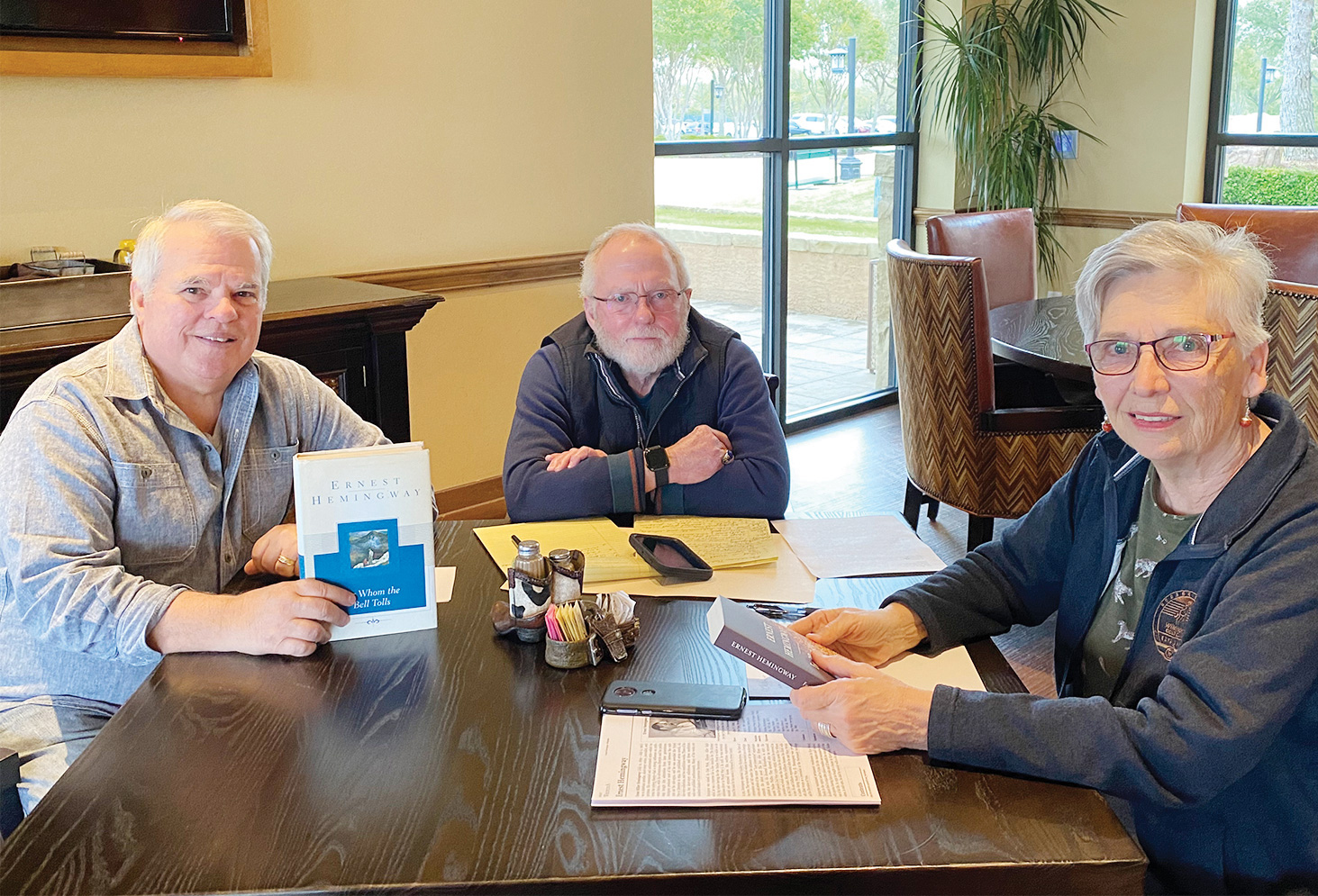 Planning session on For Whom the Bell Tolls (left to right): Alan Albarran, Mike Hall, and LaDonna Womochel

The Friends of the Library invite you to join us at 3 p.m. on Thursday, May 27, as “live” book discussions return at the clubhouse with Ernest Hemingway’s classic For Whom the Bell Tolls. The discussion will be led by the trio of LaDonna Womochel, Mike Hall, and Alan Albarran.

For Whom the Bell Tolls was published in 1940 and became an instant bestseller. The book takes place during the Spanish Civil War (1936-1939) which Hemingway covered as a news correspondent. Hemingway had visited Spain several years before the war; his time in Pamplona to watch the bullfights inspired his first novel The Sun Also Rises published in 1926. Hemingway loved Spain and was very moved by the death and devastation he witnessed as a correspondent. These experiences became the inspiration for the novel.

In 1941, the Pulitzer Prize jurors voted unanimously to award Hemingway the prize for the novel. But Nicholas Murray Butler, then president of Columbia University and ex-officio chairman of the Pulitzer board, rejected the selection because he found For Whom the Bell Tolls offensive and profane. As such, no award was given that year, denying Hemingway the prize.

For Whom the Bell Tolls is the story of a young American professor named Robert Jordan who has joined the International Brigades, an antifascist guerilla unit in the mountains of Spain. Jordan, a demolitions expert, is tasked with destroying an important bridge that will disrupt the enemy supply lines. Jordan joins a small group of guerillas to help him complete his mission, which is very dangerous.

The band of guerillas is led by Pilar, a strong woman who has been fighting against the fascists for some time. Anselmo is Jordan’s guide, who leads him to the target bridge. Pablo is another important character, who has experienced many battles, but now prefers to drink wine most of the time. Jordan falls in love with the beautiful Maria, who suffered abuse by the fascists after they murdered her parents. El Sordo is another figure who confronts the fascists with his own band of fighters in a brutal last stand at a nearby mountaintop.

For Whom the Bell Tolls is a story with multiple themes and motifs. The book deals with courage, loyalty, love, and defeat. It is considered one of the best war novels of all time. You won’t want to miss this discussion! The discussion is free and open to the Robson community. A cash bar reception will take place in the Boardroom at the Grill following the discussion, where you will have more time to meet the panel and continue conversation on the novel.

One of America’s greatest authors, Ernest Hemingway was also a very troubled individual. Perhaps you had the opportunity to see the recent Hemingway film by Ken Burns and Lynn Novick, that aired on PBS April 5 through 7? If not, you can find the film available for streaming on www.PBS.org to learn more about Hemingway and his life.