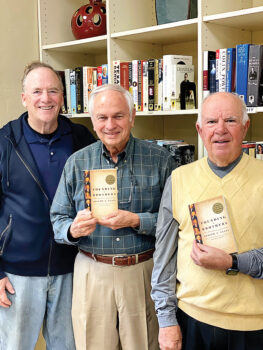 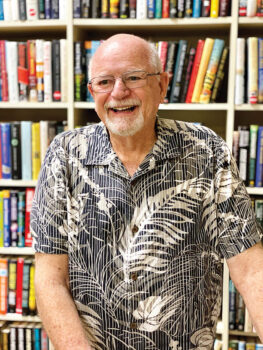 By the time this Pioneer Press is in your hands, we will be just a few days away from the first book discussion of the year presented by the Friends of the Library. Founding Brothers, a Pulitzer-prize winning book by Joseph J. Ellis will take place via Zoom on Thursday, Feb. 25, at 3 p.m. Details on how to access the Zoom link will be distributed the week prior to the event.

Founding Brothers is a different type of historical work in that it is not a biography of any individual, but an examination of key points in the lives of six important figures in early American history. The Founding Brothers described by Ellis include George Washington, John Adams, Thomas Jefferson, Alexander Hamilton, Benjamin Franklin, and Aaron Burr. Although, one must not take the word brothers too literally. These individuals were often at opposite ends on numerous issues with each other. Reading this book will illustrate that politics is tough in any era of American history!

Founding Brothers is a rather short book, with only six chapters that delve into the detail behind some of the most interesting time periods of their lives. The events are not presented in chronological order. Here’s a brief synopsis of the six chapters.

“The Duel” focuses on the days leading up to and beyond the Alexander Hamilton/Aaron Burr duel on July 11, 1804. Burr shot Hamilton, who died the next day. Ellis gives much more context to the story and aftermath.

“The Dinner” summarizes an evening in July 1790, where Thomas Jefferson hosted Alexander Hamilton and James Madison to reach a compromise over the issue of state debts left over by the Revolutionary War. Ellis presents in detail the conflict between Hamilton and Madison, and Jefferson’s efforts to find a solution.

“The Silence” takes place months before the Jefferson dinner party. In this vignette, an effort is made in Congress by Quaker delegates to end the slave trade, upsetting Southern state leaders. The issue takes on added importance when Benjamin Franklin’s name is linked to the effort to end slavery.

“The Farewell” centers around President George Washington’s letter published in 1796 to retire from public life following his second term. Washington’s willingness to step completely away from power is unique in history, unlike many countries at that time with established monarchies.

“The Collaborators” details how John Adams and Thomas Jefferson were able to work past different philosophies and disagreements to serve as President and Vice President following Washington’s two terms of office.

“The Friendship” picks up on the Adams/Jefferson relationship in their later years. Adams served but one term and did not speak to Jefferson for 12 years. The two men eventually reconciled and became close friends. Both founders died on July 4, 1826, on the 50th anniversary of American independence.

Steve Williams will moderate our discussion panel, joined by Klaus Dannenberg, Dick Spivey, and Larry Klein. Hope you will join us on Feb. 25.