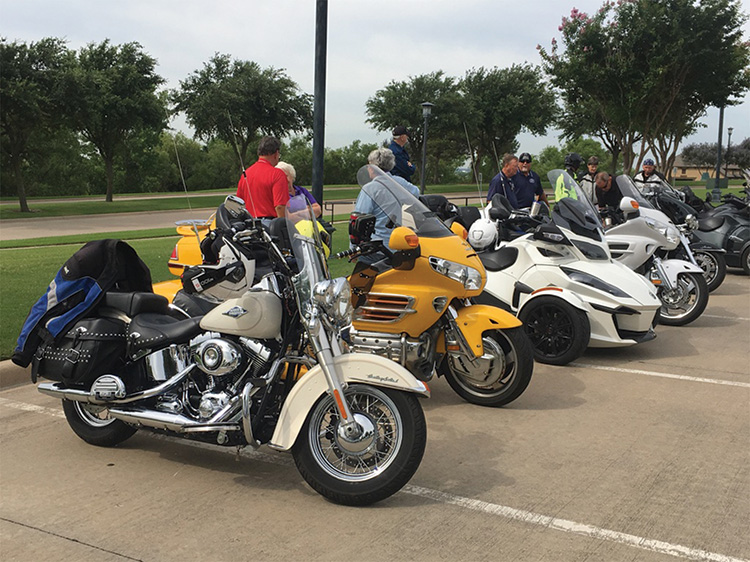 “Summer’s here, and the time is right, for…” motorcycle riding!

We gathered on June 11, for the Tuesday Lunch Ride to Reno Red’s in Roanoke, Texas. The gang proceeded on a leisurely ride on FM 156. Passing the (never ending) construction, we sauntered past the General Electric locomotive plant and through the outskirts of Texas Motor Speedway before heading to US 377 and getting our appetites satisfied.

Roanoke has dubbed itself as the “Unique Dining Capital of Texas”. It seems as if a new restaurant is opening every week. Reno Red’s, however, has been around for a while (previously as Prairie House). Fourteen folks, including the Breins, Conleys, Barnetts, Conways, Scott Baker, Dave Riddle, Steve Haugen, Art Lozano, Joseph Ace and Donna Henry were along for the ride.

The dinner ride for the month was Thursday, June 20. The Texas summer heat finally arrived and we agreed to truncate the scheduled ride to Clark’s BBQ in Tioga and head a shorter distance up to Miguelito’s in Krum. Mike Conley and Steve Haugen served as Ride Captain/Sweep. What could be better after great Tex-Mex than a snow cone from the Oasis in Ponder? Cool, sweet and refreshing! Riders on this outing included the Barnetts, Conleys, Bakers, Art Lozano, Stan Brein, Steve Haugen, Dave Riddle, Keenan Wallace and Donna Henry.

Our Road Captain, Dennis Dotson, is an accomplished long-distance rider. Twice each year he and his friend Reggie try and get away on a scenic motorcycle adventure. The unknown beauty of Arizona and Utah were in their sights last month, including the six National Parks in Utah. Dennis unfolds the tale.

“We scheduled the trip late May to allow the snow to clear on the mountain passes, but timed to beat the heat of the high desert. Our plans included specific routes recommended by professional scouts from Butler maps. Every turn, every mile was preplanned.

Our trip encompassed the Grand Canyon, Lake Powell, plus two wheeling through Zion National Park, Bryce Canyon, Capitol Reef and across Arches National Parks. We passed over a dozen mountain passes and through a good many National Forests. Typically, we saw snow and 47 degrees in the mountain passes above 10,000′ in elevation while it was a pleasant mid- to high-70s in the lower plains. While leaving the Grand Canyon we had cold rain and a bit of sleet. Only on the last day did we see mid-90s as we approached Texas. How do motorcyclists cope with the weather changes? Two helmets, two jackets, three types of gloves and really good rain gear. Changing gear multiple times in a day to stay dry and comfortable may be typical. We complemented the trip by adding Colorado’s Ouray and Durango as we headed back east. The million-dollar highway through Silverton still had a 26″ snowcap beside the roads. The next morning, we we’re off to Dallas; the last 614 miles to home”.

Great trip! Thanks for sharing, Dennis.