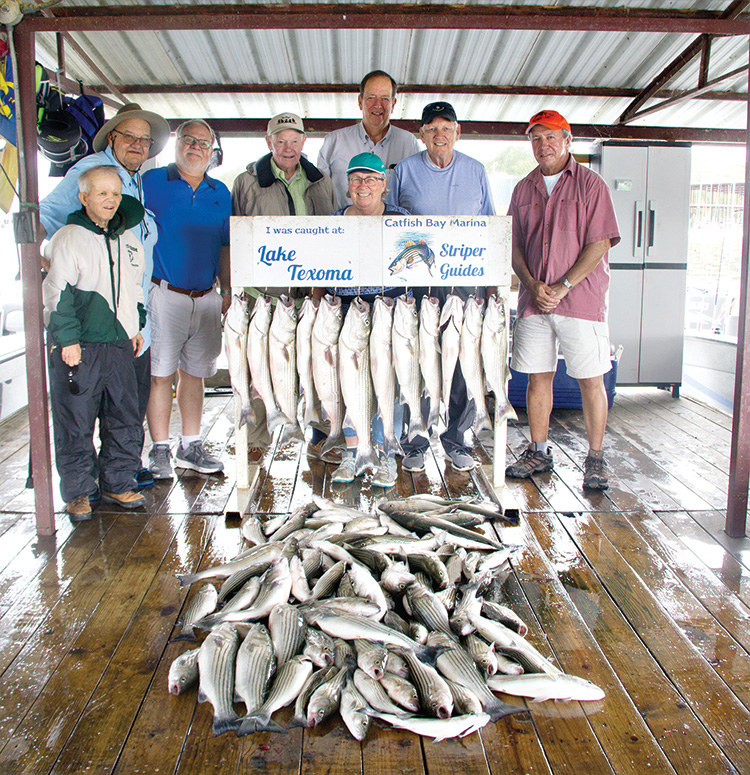 Fishingitis – they got it reel bad.

For the most part, the natural habitat for the striped bass (or striper) is salt water, spending most of its life in the ocean. But this bass is also able to migrate into freshwater streams and rivers to spawn during spring time. There are very few freshwater bodies where stripers can successfully spawn and live; Lake Texoma is one of them.

Saddled between the border of Oklahoma and Texas, Lake Texoma, a 50+ year old reservoir, continues to hold its own as one of the top fishing destinations in the region. It sustains an excellent fishery that attracts anglers from all over and boasts 19 out of 23 of the lake’s record fish since 1990. Striper fishing is very good all year long, but it’s even greater in the month of June when members of the RR Fishing Club headed north for a day-long expedition.

Because stripers are usually low-light feeders and with the rising summertime temperatures, we started out at first light. With water temperatures hitting the mid-80s, the lake created a “thermocline,” which is a transition layer between warmer water at the surface and cooler deep water below. The fish were at or above the thermocline, which is about 35 feet below the surface.

Bait fishing using goldfish produced great results with 8- to 15-pound catches. Stripers are a battle to reel in – it’s an exhilarating and rewarding experience to catch one of these incredible creatures. Each fisherman reached his limit of ten stripers within three hours, which filled an ice chest with tasty striped bass fillets. No wonder Lake Texoma is called the “Striper Capital of the World”!

The summer striper fishing has been fantastic and this wonderful lake never ceases to amaze us time and time again. For the fishing enthusiast, in addition to the striped bass, Lake Texoma offers ample opportunities to catch a variety of other species including catfish, smallmouth bass, largemouth bass, sand bass, crappie, gar and paddlefish.

Interested in dropping a line? Plans are always in the works for fishing destinations to Lake Texoma (striper, catfish and bass), Lake Ray Roberts (crappie and bass) and Lake Tawakoni (catfish), among others.

The RR Fishing Club meets the second Wednesday of each month at the Wildhorse Grill Boardroom at 5:00 p.m. For any inquiries, comments or suggestions, contact [email protected] or Scott Baker at 214-334-7664.