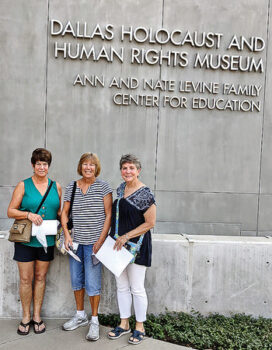 Girls On Wheels delve into the history of the Holocaust and its relevance today.

In 1977, a group of Holocaust survivors had an extraordinary vision—teach the North Texas community the lessons learned from the Holocaust and memorialize the six million Jews and others persecuted by the Nazis. Their legacy, the Dallas Holocaust and Human Rights Museum opened in 2019, nearly 75 years after the fall of the Third Reich. In their recent visit to the museum, Girls On Wheels (Cassie Richardson, Nancy Burns, and Vicki Baker) followed the path of these horrific events which forever changed the world.

The museum lobby was flooded with sunlight streaming through its floor to ceiling windows. This was soon overshadowed by the dark history we were about to encounter. Entering the main exhibit room, a sense of foreboding took hold. Through artifacts, photographs, and films of property destruction, ghettoization, and deportation of Jews to death camps, we confronted the heinous world views of Adolf Hitler. The display of German flags, swastikas, Nazi propaganda, and quotes from Mein Kampf instilled anger, sadness, and revulsion, forcing us to examine the ugliest aspects of mankind’s past.

Objects recovered and saved from that time—a boxcar to shuttle Jews to slave labor and death camps, formless uniforms worn by prisoners, piles of infant’s and children’s shoes, and bowls and spoons used to eat inadequate daily food rations—were on display. Interactive screens were scattered throughout, each containing personal testimonies from Holocaust survivors, each horrifying account demonstrating how global the Holocaust was.

A hologram theater created virtual conversations with Holocaust survivors. Having just soaked up information from the main exhibit, we now came face-to-face with survivor Eva Schloss. Through an AI system, she replied to our questions, recounting her personal experiences before, during, and after Nazi occupation, her survival from the camps, and her ability to move forward years later.

What might be considered the light at the end of this terrible tunnel was the gallery highlighting the work of the International Tribunal at the post-World War II Nuremberg trials, where many perpetrators were found guilty of their crimes against humanity. Then the Memorial Room—a space to memorialize the six million Jews who died during the Holocaust.

The exhibits leading us through the Holocaust timeline seamlessly transitioned into the Human Rights Wing. The room was full of jarring displays documenting genocides and other human rights violations throughout history and still occurring today, all a part of a larger human rights struggle. Lastly, the exhibition explored the worldwide movement for human rights and what we all can do to uphold them, from recognizing our own biases to standing up and speaking out when we witness injustice.

The Holocaust Museum was the passionate undertaking by local survivors who outlived Hitler’s attempt to wipe out world Jewry set to a voice both intimate and personal. The galleries were a visually astounding, heartbreaking, and gut-wrenching experience, but foremost, the exhibition celebrated the men and women who found the strength to endure the unimaginable and accomplish the extraordinary.