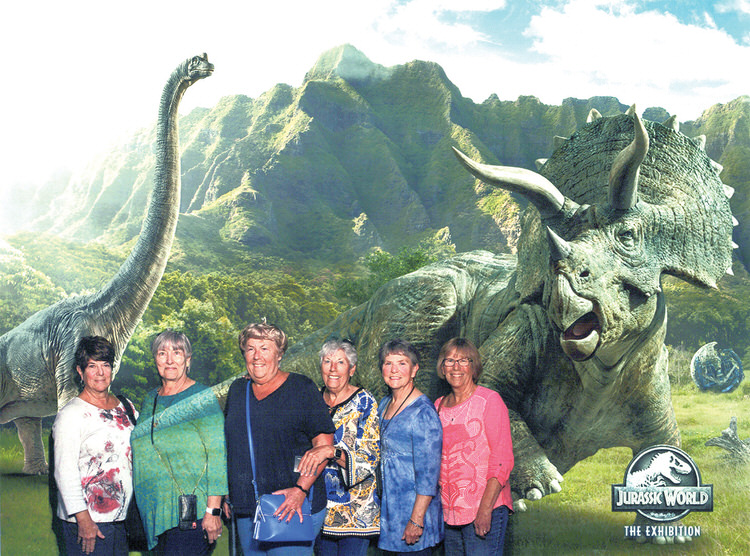 Ever since Michael Crichton published Jurassic Park, we’ve imagined what it would be like to walk among these breathtaking creatures—to come face to face with a Velociraptor, Triceratops, Brachiosaurus, or Tyrannosaurus rex. We’ve all seen the fossilized varieties in museums, but for Girls on Wheels, the immersive 20,000 square foot “Jurassic World: The Exhibition,” brought dinosaurs and their world to life. The experience mixed the vibe of a theme park with the backstory of science. But the big—like, really big—attraction was the animatronic dinosaurs, some measuring over 24 feet tall.

Our journey started with a short ride aboard the ferry to Isla Nublar. Arriving on the island, we walked through the massive gates and were welcomed by the noble, towering Brachiosaurus. Park handlers introduced us to the adorable baby Ankylosaurus, it’s armored hide covered by little knobs and bumps. So began our encounter with life-size dinosaurs and the exploration of their richly themed environments.

The tour took us through the scientific Hammond Creation Lab, which outlined the InGen de-extinction process to bringing dinosaurs back to life. Pieces of amber containing dinosaur DNA lined the walls. We observed baby dinos at each stage, from incubating eggs to hatched babies sleeping soundly, their chests heaving in and out with each breath!

What’s a trip to Jurassic World without a little terrifying chaos? Watching our step at every turn, we feared attack from the ever-screeching Velociraptors. But not to panic, as the handlers were never too far away. Suddenly, the park staff were alerted that a dinosaur had escaped from its enclosure. And it wasn’t one of the gentle herbivores—we had stumbled upon the most fearsome of all—the mighty Tyrannosaurus rex rampaging toward us. Luckily, the staff were able to escort us back to safety with no harm done.

Not leaving science behind, the recreations were accompanied by authentic fossils, paleontological specimens, and interactive exhibits explaining dinosaur habitats, diets, vocalizations, and appearances. Informational guides offered ways to look at the exhibit through scientific eyes, covering topics of ethics in science, climate change, DNA and genetics, and extinction.

We’re told this is the closest Girls on Wheels will ever come to experiencing living dinosaurs, but we’re not so sure. Dinosaurs may be extinct from the face of the planet, but for us, they’re still very much alive and well in our imaginations!