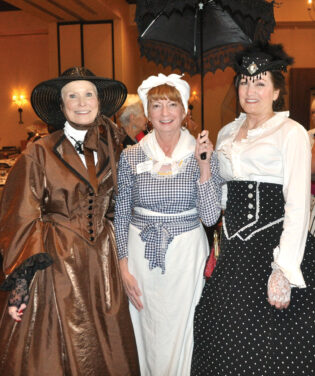 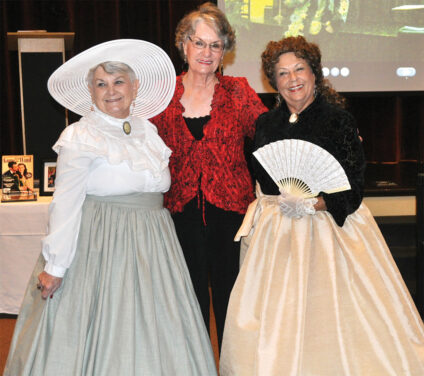 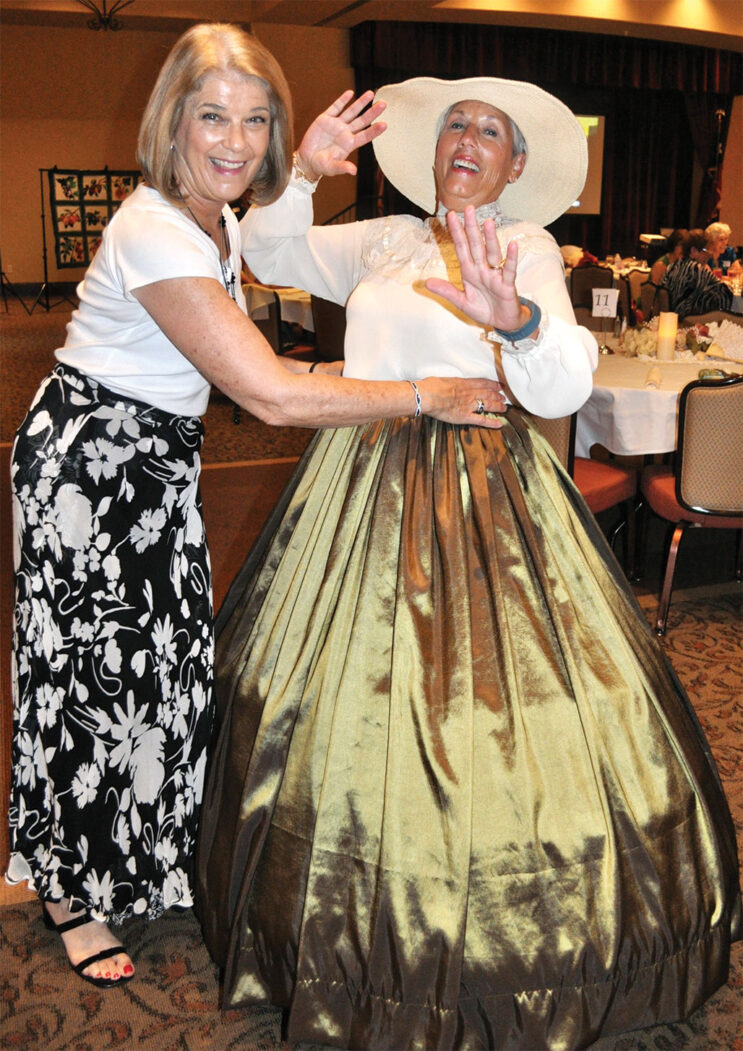 Before calling the meeting  to order, Susan Hebert gets a  minor costume adjustment from Sandy Conwell.

Teresa Blackburn-Korn
A standing ovation was given to guest speaker Bobbi Hardy after she portrayed Margaret Mitchell with an in-depth, behind the scenes recounting of Gone With the Wind at the August Women’s Club luncheon. Many lesser-known facts were revealed to the audience as they sat on the edges of their seats, eager to take in the next spicy morsel of information while they mentally traveled down the proverbial memory lane. Women’s Club members were properly prepared for this event as many arrived in “Southern” attire of hats, gloves, parasols, hooped skirts, etc. Tina Hoffenberg (with help from the Wildhorse Lady Niners golf group) decorated the tables with beautiful magnolia blossoms, candles, paper fans and strings of pearls; and theme music from the Gone With the Wind movie played in the background. Greeting guests for this auspicious occasion were Geraldine Gawle, Pat Bender, Mary Jo Belding, Sharon Heidebrecht, Nancy Myers and Cherry Tillman. To set the stage and facilitate the introduction to the program, a humorous parody was performed by Peggy Crandell, Glenda Brown, Jan Utzman, Susan Hebert and Barbara Runner. Susan Hebert, president-elect, called the August meeting to order for the vacationing Mala Bowdouris. She recognized Sue Halsted and Geri Power of the Material Girls for their stunning hand-appliquéd quilts, which were on display to the left of the stage. Also being recognized were ladies attending for the first time, new members and those having a birthday in August. Treasury report explained a current balance of $12,663. Liz Dinkins announced that $725 in donations was collected by Friends of the Family along with numerous school supplies for the kids. Judy Ruggerio reported that the annual Holiday Market will be October 11, and she is still looking for a few more volunteers to help. Check us out at: www.rrwomensclub.org.