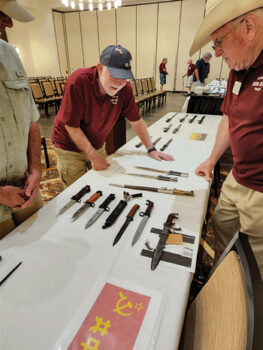 Bayonets were a hallmark of the infantry during the “Modern Age” of the 16th century and through the world wars of the 20th century. Many a historian would add that the bayonet was an integral part of the Western Way of War.

The evening’s event was an informative and interesting presentation on “Bayonets of the World” by club member Miguel Ondina. And following the presentation, the attendees were able to closely view and discuss the arms on display with Miguel and the table hosts in attendance.

Among the 60 amazing pieces were bayonets such as the “Trowel” bayonet (a combination spade and blade) as well as “dress,” serrated, and plug bayonets (including ones now defined as illegal for use in warfare by the Geneva Convention). Some bayonets also served as swords, others as knives, and some were attached or integrated into the long gun. The wide-ranging presentation discussed the history, development, usage, types, and the future of bayonets, covering the world, primarily British, French, Chinese/Russian, and, of course, American, spanning the U.S. Civil War to the present.

While we don’t tend to associate the use of the bayonet with modern warfare, in 1951, during the Korean War, a company of American troops took a Chinese stronghold, led by the uphill bayonet charge of Captain (later Colonel) Millet. Perhaps the most famous bayonet charge in U.S. history, though, is the one executed by the 20th Maine at Little Round Top on July 2, 1863. This successful charge avoided a collapse of the Union’s left and perhaps saved the Army of the Potomac. The bayonets used during this charge were the Model 1861, which was on display. As usual, member contributions really added that special touch to the collection, and Ranch resident Robert Luciano provided a Russian-made bayonet, for use with an AK-47, that he was able to bring back from his time serving in the U.S. Army in Iraq, from a cache of items discarded by Iraqi troops fleeing Saddam Hussein’s palace! A truly unique modern-era “bring back” bayonet.