The Antique Gun group met to discuss and share “Guns of the Old West. 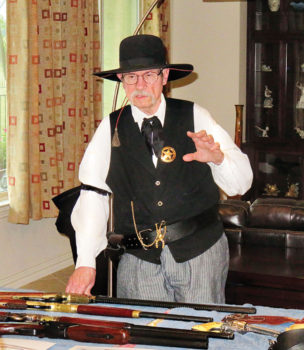 The Robson Ranch Gun Club has over 150 members. The club is composed of seven different groups. In April the Antique Gun Group met to discuss and share “Guns of the Old West.” Dave MacDonald, who is a cowboy action shooter and expert in old west guns, led the discussion. Dave gave a history of many guns that he brought to the meeting. After his discussion a number of those attending shared the history and background of guns they brought to the meeting. Miguel and Judy Ondina coordinated the meeting and provided after-meeting snacks. It was a great educational meeting and sharing of information of these classic guns.

The April general meeting of the Gun Club featured Tracy Murphree, our county sheriff. Sheriff Murphree has over 28 years of law enforcement experience. The feedback from members was overwhelmingly positive. Tracy gave a short presentation and then opened it up for questions. Sheriff Murphree spent an hour and a half providing information and direction to a very appreciative audience. After the meeting members knew the county was in good hands with a great sheriff like Tracy Murphree.

Anyone at Robson Ranch that would like to join the Gun Club, email Dave Parker at [email protected] There is no cost to join the club, and you can get involved in as many activities and groups as you are interested in.