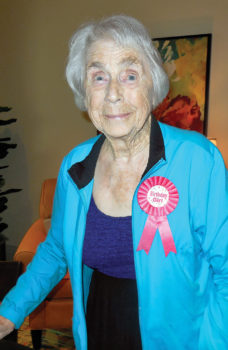 Precisely at 8 o’clock every Tuesday and Thursday morning a diminutive, slender, white-haired lady wades into the indoor pool and vigorously exercises for one hour in the water aerobics class. Two evenings a week she engages in card games. Warning: if you are her partner do not take the game lightly! Showing her artistic and creative side this same lady is an active member of Sassy Stampers and Stamping Up. While this amount of activity is common for many Robson residents, this lady is special: she just reached her 98th birthday.

She was before Charles Lindberg’s famous flight, born before the Great Depression and the Dust Bowl, and born in the year women received the right to vote and prohibition was enacted. Meet Cecile Carroll, born May 29, 1919 at home in a farmhouse in Winnebago, Minnesota. Cecile was one of six children. She was married twice and widowed twice, having nursed both husbands through devastating illnesses. She married young the first time, and she and her husband farmed the land. Escaping the hardship of farming, Cecile and her husband moved to Washington State and her husband became a logger. Cecile, not one for being inactive, worked in a crab factory. Following this endeavor the family moved to California, and Cecile joined the assembly line at Honeywell. Honeywell invents and manufactures technologies that produce energy efficient products. Cecile retired from Honeywell and traveled to the desert in Arizona when her first husband passed after they had been married for 23 years. Cecile followed neighbors to the middle of nowhere in Arizona, living in a mobile home. She worked summers at a gift shop in the Grand Canyon and winters in Death Valley. While at the Grand Canyon she hiked to the bottom, a trek that took five hours. While working Death Valley she met her second husband and was married for 30 years before he also passed.

Cecile’s passion is visiting the national parks. She has traveled extensively, attempting to visit as many of the national parks as possible. Cecile’s final move was to Robson where she lives with her daughter, Joyce Martin. If you are fortunate to meet Cecile do not give a negative response to her normal greeting, “How are you today?” Her upbeat and realistic remark will surprise you. By the way, Cecile has two brothers still living; they are both younger. Happy Birthday, Cecile.