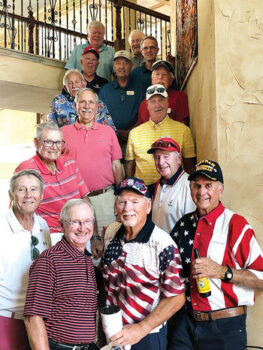 Hibler with fourteen of his fellow Featherheads at his 90th birthday party. 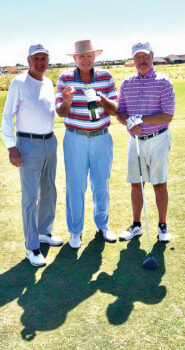 Robson resident Ray Hibler was born on the 4th of July, 1931 in Bertram, Texas. But it wasn’t until the early 1960s that he picked up a golf club for the first time in his life and discovered his true passion. By 1977, Ray had become a fixture on the amateur golf scene and was asked to serve in many local and national organizations. Ray was one of the select golfers who rated courses for Golf Digest and his job was a great excuse to travel the world with his wife, Rolande. He became proficient at all aspects of golf and went on to place in the top 10 in several international seniors golf tournaments.

Eventually, he went on to win the World Senior Golf Championship and followed that victory with wins at the Mexican International Championship and Guadalajara Senior Invitational among others.

His beloved wife, Rolande, passed away in 2017 after a battle with cancer. He moved to Robson Ranch and soon fell in with a group of resident golfers dubbed the “Featherheads.” Instead of gambling, the group puts in a dollar for every birdie a player makes and they donate the money to Support Our Troops. Today Ray plays with the Featherheads three to four times a week, shooting consistently in the 70s and 80s. In October of 2020, Ray had his ninth hole-in-one, this time on number 2 North, and he is eager to bump that number to 10.

On July 4, Ray’s two daughters, who live in Flower Mound and Ponder, hosted a surprise 90th birthday party for him. Among the many family and friends attending were fourteen of his fellow Featherhead golf buddies. For over half a century Ray’s skill, knowledge, integrity and modesty have impacted many golfers. And the qualities he displays on the course reflect his legacy of generosity and quiet strength that have permeated all aspects of his life—a life well lived. Happy birthday Ray and here’s to that tenth hole-in-one!