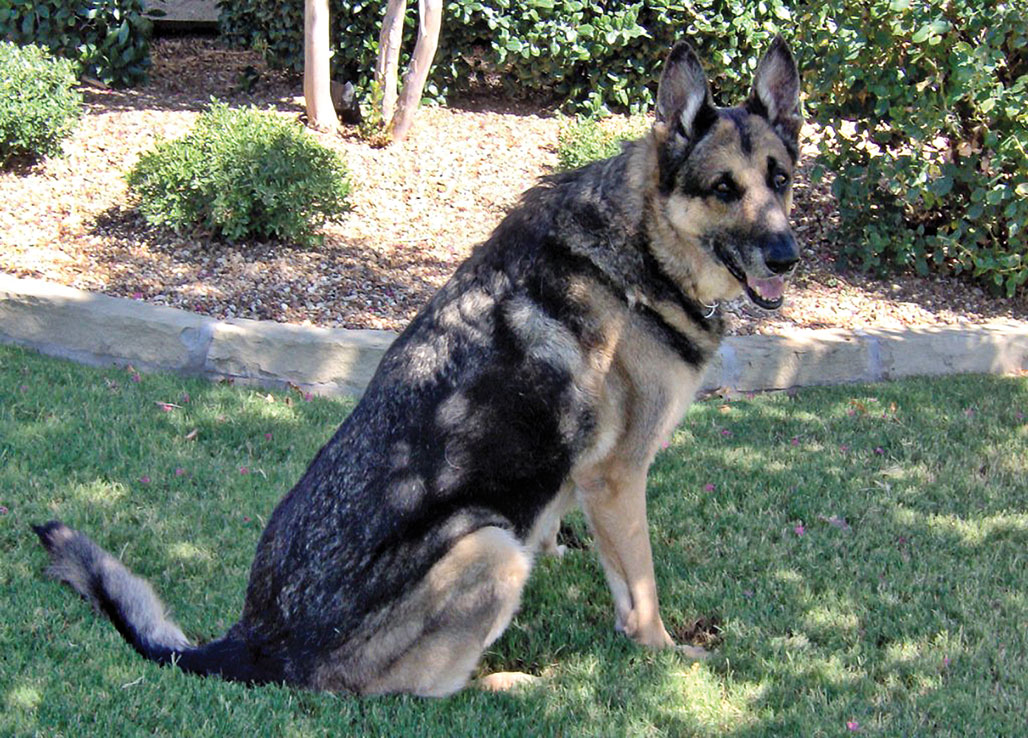 Any dog who takes their people for a walk along the east side of Ed Robson Blvd between Balentine and Crestview has likely met King. He is the intimidating-looking, 100-pound German shepherd who lives with Carol Rose. He runs along the fence carrying his favorite toy, a Hol-ee Roller known as “blue.” King’s ominous disguise fails quickly because he’s really a big teddy bear who loves people and most dogs.

The first five years of King’s life was spent with an older couple in a travel trailer at a Mesa, Arizona RV park. He was always leashed and never able to run loose. Carol invited the couple to move their RV to her acre-plus fenced property where King could run free. It was like heaven for him, but the sudden activity caused his tender feet to bleed and his nails to break. When the man died, King moved in with Carol.

Later Carol moved to Robson Ranch. King, now 11 years old, doesn’t have as much room to play, but he chases rabbits and birds and fetches “blue.”

Since much of his early life was spent in solitude, King is thrilled to see people now. Robson residents come to Carol’s house to pick up their new name tags, but King is certain they came to see him. He greets them with a toy and urges them to play fetch outside.

King’s little “sisters,” a Pomeranian and a Poodle, have passed away. Now when Carol goes to work, King spends time alone. Luckily he has the best dog-sitter, Linda Watrak, Happy Tails secretary and Robson dog-sitter extraordinaire. She comes by during the day and often brushes King’s hair in the middle of the back yard, which birds grab and use to make nests.

When King was young, dog food companies recommended feeding pets only one kind of food, and the same kind of kibble is exactly what King ate for his first five years. His digestive system had no variety, and when he finally experienced new food, King had terrible diarrhea. His situation provides a perfect example of what Hannalore discussed at the November Happy Tails Dog Club meeting regarding diets for animals and pet health. It’s been a long road to de-sensitize or at least to minimize King’s digestive challenges, but he’s finally able to have some variety in his diet. King now enjoys a variety of tastes and better nutrition. The nutritional improvements show in his coat, teeth and body. King has lost 20 pounds since coming here to Robson, but he is healthier than ever.

For a copy of the materials Hannalore provided at the November meeting, contact one of the Happy Tails Dog Club officers. Diet and nutrition as well as many other valuable and interesting topics are presented at Robson Happy Tails Dog club meetings on the second Saturday of every month. We invite you to join us in room 105 in the Creative Arts Center at 10:30. Be sure to say “Hi” to King when you go by his house; he’ll probably run back and forth along the fence showing how happy he is to see you here at Robson Ranch.