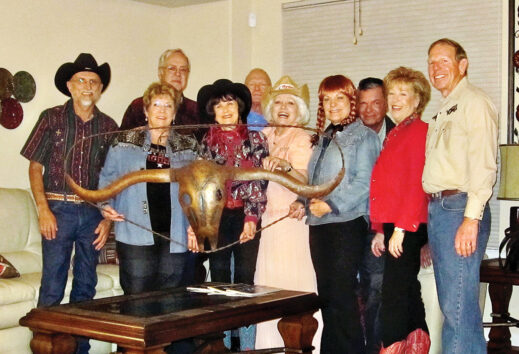 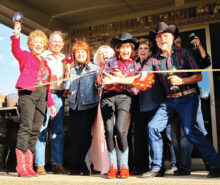 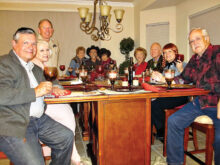 “Heard It Through The Grapevine” does the Texas 2-Sip. Yee-haw! “This ain’t my first rodeo! Texas is one of the oldest wine producing states with vines planted in 1650, before California and Virginia.

The Grapeviners strapped on their western duds and headed over to Nancy and Pete Toppans for some finger lickin’ Texas BBQ with all the fixins’ and some good ole’ Texas “joy-juice.”

Sure ‘nuff, it was a “ribbon cuttin’” shindig” bein’ it was the Toppan’s first hootenanny in the newfangled hangout. We raised our glasses to a “here’s how” made by Catherine Bass with the cowgirls toastin’ with a sweet crisp Texas Moscato, while the cowboys downed a soft, supple fruit flavored Texas Merlot.

The gang then chowed down on some lip-smackin’ Texas style munchies brung by Catherine and Ken Bass and Terry and Michael Gilberti, along with Nancy and Pete’s finger lickin’ barbeque pulled pork and chicken fixins’ with simmering baked beans. Viv and Al Wright mustered up some creamy southern potato salad, and Mary and Roy Bryant topped us off with a yummy belly-fillin’ cheesecake dessert with pipin’ hot Arbuckle.

While eatin’ our vittles, we drank up our happy juice from down home Texas vineyards and became “jolly as a gopher in soft dirt” tellin’ all them big hat no cattle tales while decidin’ which wine outshined the other.

You can always tell a Texan, but you can’t tell him much. When the scrappin’ was over, most were “happier than a dead hog in the sunshine” with Vivian and Al Wright’s Llano Estacado Sweet Red. Pullin’ in a close second was Mary and Roy Bryant’s white Texas Viogner from Becker Vinyards and hangin’ in third was Terry and Michael Gilberti’s Messina Hof Barrel Reserve Tex Zin, Zinfandel.

Texas is the fifth-largest wine producing state in the nation, with 273 wineries throughout the state.

Nope, most of us didn’t just fall off the turnip truck. We’re country as turnip greens when the situation calls for it. Yep, the Grapeviners had a bang up good time bendin’ an elbow! So grab a glass and see what the Lone Star State has to offer ya. You may find it to be “fine as cream gravy.”