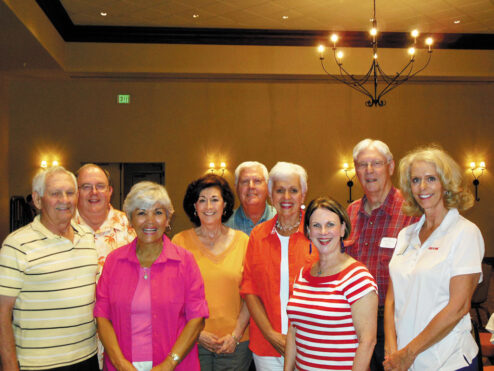 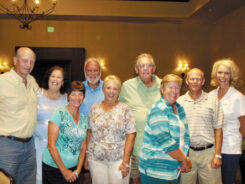 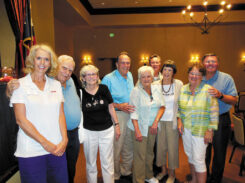 August Trivia Night was a night of fun with 11 teams and four spectator teams. Each team had eight members, which either helped or hindered with getting the answers. It’s always best to go with your gut, but some teams talked themselves out of the right answer. Several teams returned, and the new teams really jumped into the competition as well as coming up with some unique team names. Beauns Eauns (Bozo’s); Cat Sass; Lonestars DBC were just a few of the team names. Also as a bonus, resident Carolyn Thomas, ReMax Realtor, sponsored the event with snacks and six $25 VISA Gift Card door prizes.

The group seemed to get into the game quickly, and the scores were up and down between teams throughout the evening. Althea Parent was the MC for the night, and Carolyn was her assistant. Carolyn would answer some of the questions but was not always correct either.

We played six rounds, which consisted of three questions each, and teams would bet points on their answers. The Halftime question had 10 possible answers, and teams received one point for each correct answer; nine teams guessed nine of the 10 correctly. Do you know the top ten Sesame Street Characters created by Jim Henson?

There are several categories during Trivia night. Here are a few of the questions from the August Trivia. See answers at the bottom.

2. Definitions: What is the term if you have a fear of Clowns and Mimes?

Eight teams members working together as one…no use of cell phones…no call a friend! With each of the Trivia nights there is a bit more of Robson Ranch competition; makes for a lot of fun. Hope you’ll put a team together and join us on November 14 for the final Trivia Night of 2014.

Enjoy dinner at the Grill and then come play!