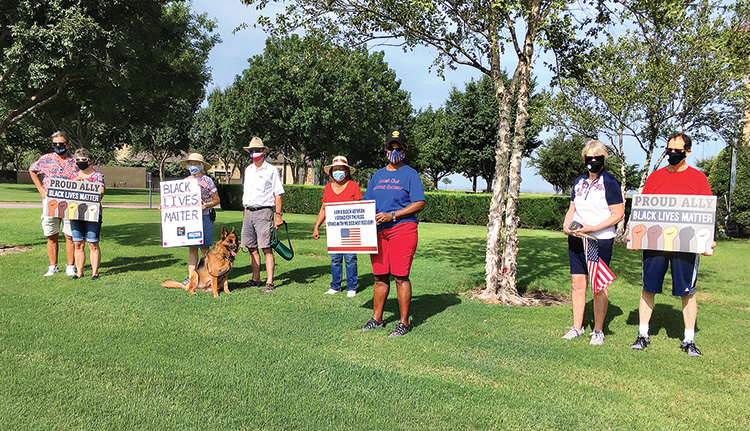 When Robson Ranch HOA cancelled the annual July 4 parade, residents celebrated Independence Day in a variety of ways, including a parade of cars, a flyover, and an impromptu walk by some fifty or sixty residents in support of social justice and racial equality. All wore masks and practiced social distancing from non-family members.

“When George Floyd was murdered and the protests began, I reached out to friends in the African American community and asked how I could best support them,” says Victoria Shoemaker, one of the participants. “The overwhelming response was, ‘Show up, speak up, and educate yourself on racism in America.’ This march was one small way to show that support, and I look forward to more of the same,” she added.

“Many Robson Ranch residents feel outrage over the continual display of racism and hatred for black citizens of our country,” notes Jan Lands. “After George Floyd’s death Victoria and I met with others here to discuss how we felt and what we could do to show empathy for our fellow Americans. We decided on a protest march. I was proud to be a part of this group as we marched quietly and respectfully along Ed Robson Boulevard to show our support for the cause.”

“My family, my friends, my daughter, and I have engaged in protests for equity and justice for years,” says Janet Scott-Harris. “In fact, black women and girls have engaged in protests and been assaulted since before this country was the United States of America. On July 4, I was proud, honored, and humbled to march with and be sheltered in the loving embrace of men and women here at Robson Ranch who share my goal of peace, justice, equity, and love for all.”

Susan Borsellino says she was “proud to have participated and look forward to more opportunities to educate and learn from each other”—sentiments echoed by many participants. The walkers got a lot of high-fives from residents in passing cars and golf carts, and there were many positive comments, too.

At the end of the march, participant Tiffany Ramzy put the sign she carried in her yard, next to her American flag. “A resident came by and knocked on my door later in the evening,” Tiffany says, “and when I answered, she said: ‘I just wanted to tell you that I saw your sign and I support you and I stand with you.’ I thanked her. Her little gesture added more smiles to an already delightful day.”

The wording on Tiffany’s sign read: “I am a black veteran. I stand for the flag. Stand with me against racism.”