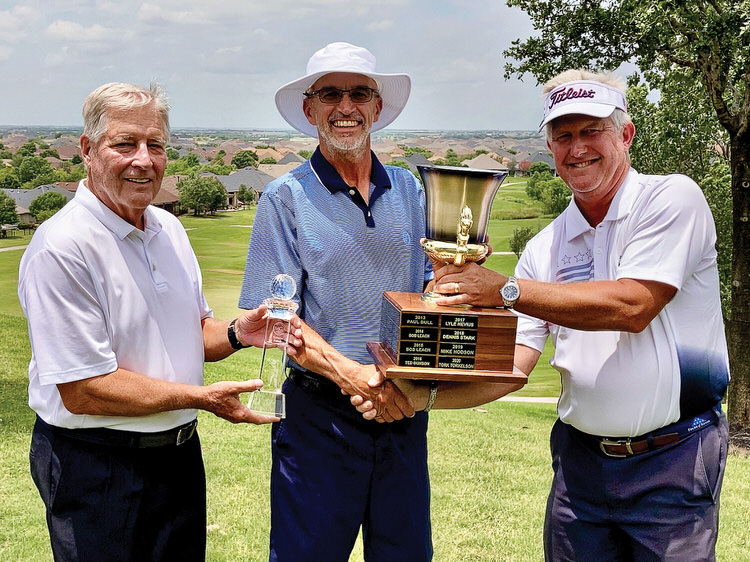 In the past few weeks, the Robson Ranch Men’s Golf Association (RRMGA) have held their annual Robson Cup event and the Wildhorse Cup. The two events together drew over 160 entries with the result being a new Robson Cup Champion for 2021 and Team Red defending its Wildhorse Cup title for another year.

The Robson Cup was held June 25 through 26 and was a 36 Hole Net competition (total score after handicaps/strokes are applied). The participants were divided into flights based upon their handicaps and their chosen tees (Gold, White, Blue). The winner is the player with the best Net total after 36 holes. This year, there was a three-way tie for first place but after USGA tie breaker rules were applied, the winner was Doug Street. He shot a 4 under par 140 edging out by way of a tie breaker, Tim Hughes and William Vess who also each posted a score of 140. Par for the two-day event was 144. Congratulations Doug! Also, congratulations are in order for all flight winners who were:

Just a few weeks later, the RRMGA conducted the very popular Wildhorse Cup. This is a Ryder Cup style event where two teams, Team Red, captained by VP Jim Kohnert and Team Blue, captained by President Lee Griswold, are chosen from all who signed up to play at a pizza and beer party the Wednesday before the event. The two teams then face off in a three-day event. On day one, it was Best Ball with the winning two-man team receiving one point for their team. After day one Team Blue led the competition 11.5 to 8.5. On day two, there were two 9-hole matches. The first nine was a Scramble and the second nine was Alternate Shot. At the end of day two Team Red took an overall lead 31.5 to 28.5. The final day was individual match play with 40 points up for grabs. At the end of the event Team Red held on for a slim victory 52 to 48. It was a great event, with cold beer served on the patio each day, and the teams cheering on or jeering the competition as they came up the 18th fairway!

Membership in the RRMGA is open to all men at the Ranch. The Association sponsors weekly play day events and tournaments throughout the year. There are players of all skill levels and handicaps, so come on out and join the fun. Membership applications are available at the Pro Shop and online at www.rrmga.com.