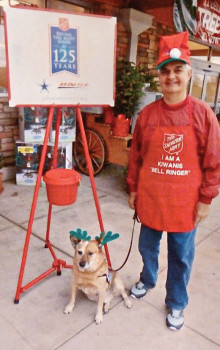 Every year teams of two Kiwanians at Robson Ranch volunteer to help the local Salvation Army by ringing bells at the local Kroger. Residents are encouraged to come by, say hello and put a couple of bills in the red pot. According to Jerry Waynant who has headed the bell-ringing project for three years, “There were many nights where we had to use a ruler to stuff the money in the pot.”

The Kiwanis Club fielded about 24 different people over two weeks at the Kroger on Teasley. Well over 50 person hours were involved over the two-week collection cycle. Well, maybe not all people hours. One of the most successful teams was one of our newest members, Art Masciere and his dog Cody.

Art and Cody were pleased to join celebrities, notables and just common folk throughout the land, ringing bells and raising money for the Salvation Army mission. It is not surprising that the Kiwanis Club named Art Citizen of the Year in 2014. He promptly joined the club. He is often seen with his service dog, Cody. They embody the Kiwanis Mission of Serving One Community and One Child at a Time. We all can make a difference.

If you have the spirit to give of your time and talents, Kiwanis is just the place for you. Fellow Kiwanians hope you will find our club of interest. Stop by and introduce yourself at one of our meetings. They are held on the first and third Fridays of the month in the Bandera Room of the clubhouse starting at 9:00 a.m. after a half-hour of socializing. We’d love to have you join us.

An added plus is you will find some of the friendliest residents on the Ranch, though I must admit I’m a bit biased.