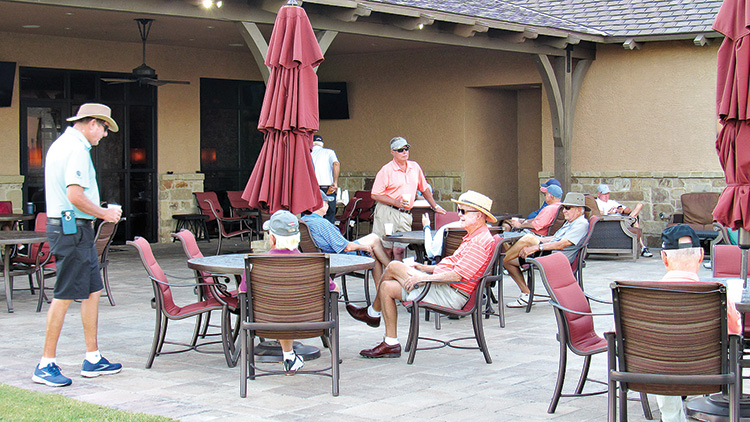 The Robson Ranch Men’s Golf Association (RRMGA) is back playing golf. From the look of the turnouts at the first few events, it is evident people are ready and willing to find a new normal while playing golf. Club bumps have replaced fist bumps and social distancing is just a way of life on the course and around the pro shop. A hardy well done needs to go out to the pro shop, the golf staff, and all the groups here at Robson that worked so hard to keep golf up and running after the course was opened and residents were allowed to return to play. Now is not the time to let our guard down as we all need to maintain social distancing and keep everyone safe.

As for the RRMGA, the first play day was held June 4 which was a Texas Two Step 1-2-3 event. The way the game works is that each team records the best score on each hole depending upon whether that hole requires one, two, or three scores and the low total wins. The winning team of Johnny Eason, Steve Waggoner, Alan Massey, and Dave Ferneding recorded a 20 under par while the second place team of Kent Ramsey, Anthony Riela, James Gale, and Sammy Monge also carded a 20 under par, but they lost out on the tiebreaker. Well done by all.

The next event was the 3-Club Best 2 Balls Challenge. Each player on their four-man team could only use three clubs, and there is no sharing of clubs. Some folks choose to use a putter as one of the three clubs, others did not. There were some interesting stories about putting and some rather unique “putting styles” observed on the green by those who did not select a putter as one of their three clubs. After all was said and done, the winners in the first flight with a 15 under par were Bill Crawford, Tim Hughes, Mike Scott, and Mark Whaylen, and the winners in the second flight with a score of 18 under par were Ron Schwertner, Dan Shoemaker, Tim Trotter, and Darryl Williams. Congratulations to both teams.

Membership in the RRMGA is open to all men at the Ranch. The association sponsors weekly play day events and tournaments throughout the year. There are players of all skill levels and handicaps, so come on out and join the fun. Membership applications are available at the pro shop and online at www.rrmga.com.