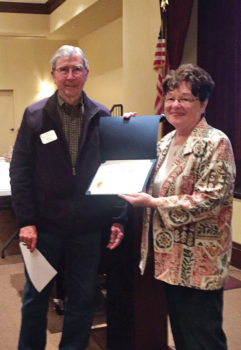 Like the Army, the Support Our Troops (SOT) organization here at Robson Ranch keeps rolling along to fulfill its mission. Supporters not just of the Army but of all our military branches meet on the second Monday of each month at 1:00 p.m. in the clubhouse to continue their mission, supporting military personnel who are related by blood or love to Robson Ranch residents as they serve our nation.

And how does SOT carry out its mission? According to President Susan Galbraith, there are several ongoing support initiatives, including monthly shipments of large care packages to one overseas unit, 11 deployed troops and 80 active, but non-deployed troops. The deployed troops are in Korea, Germany, Iraq, Afghanistan and at sea.

Last year, we spent $45,000 on shopping for our troops and then shipping at $17 per each box sent out, which enables arrival of our boxes to deployed troops within seven to ten days. What comprises the SOT Care Package? Cookies made by Robson Ranch Sweeties in the cold weather months of November, December and February are packed into our boxes and the Girl Scouts provided us with 104 boxes of their cookies as well. During the year, magazines of interest are sent to the troops thanks to Mark and Arlene Pfeil. Prestige Family Dentists provided candy to stuff into our boxes which also contain jerky, gum, hygiene items, etc. These highly-anticipated goodies require the services of four groups of packing volunteers, which are headed up by Jean White, Valerie Tarren, Sally Bagot and Donna Chabot. We shipped 631 boxes in 2018, 76 boxes in December alone. SOT also sent out holiday cards to all 95 of the troops we sponsor. Inside each card was a check for $100.

Many letters of appreciation are received from the troops, which are displayed at the monthly meeting. SOT members also are provided with greeting cards made by the Robson Ranch Sassy Stampers in which those who wish to write personal greetings, thanks and encouragement before dropping the pre-addressed and stamped envelopes into the mail.