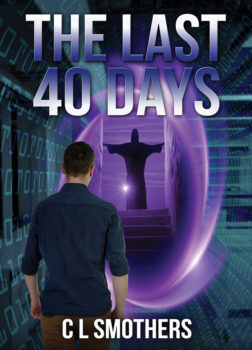 Since the time I was a young teenager I thought how interesting it would be to build a time machine and go back to AD33 and see for myself if Jesus Christ was who he claimed to be. That thought was the basis of this book.

Was Jesus Christ really who he claimed to be? Dr. Jeremiah BarJobe, a theoretical physicist, spent years torn between his scientific and religious beliefs. After the deaths of his mother and wife he loses his faith in God, becomes a drunkard, quits his job with the CIA and abandons his career.

A company in Rome offers Jeremiah a job to head and develop a time machine project. Maybe he could turn his life around and prove the validity of his PhD thesis on time travel. Once the machine was built it might be possible for him to go back in time and discover if Christ was who he claimed to be.

Three years pass. Animal and unmanned tests were successful. He had become rich, and his life was budding with a new romance. RMI agrees to let Jeremiah travel one week into the future to complete the manned testing and wrap up the project. As he steps though the time gate the system fails. Before they can fix the system the Italian government shuts the program down citing national security reasons. Jeremiah is stranded in 30 AD Rome with no hope of ever returning.

He is alive but has no idea of what is to come or if he can survive in his strange new environment. He accepts his plight and works to rebuild his life in ancient Rome. He gets a job with the Roman Intelligence Service and is very successful.

Pontius Pilate, the governor of Judea, is concerned about a prophet called Jesus and the Judean Brotherhood. Fearful of a revolt he asks the RIS for an undercover agent to come to Jerusalem to investigate. Jeremiah is assigned to go to Judea to help prevent the revolt. Pilate then tasks him to infiltrate the Brotherhood and understand their effort to recruit Jesus to lead a revolt against Rome. The year is 33 AD.

Jeremiah witnesses the crucifixion and burial of Jesus. Pilate assigns him to oversee the guarding of the tomb, which includes both Roman and Judean priesthood guards.

On the morning of the third day of Jesus’ death a blinding light occurs. The stone is removed from the entrance and Jesus’ body is no longer in the tomb. Jeremiah and the guards search for Jesus, but there is no clue as to where he is or how the tomb was opened. With Jesus gone the Brotherhood is no longer a threat, so Pilate tells Jeremiah he must find the body or prove Jesus is dead—fearing the priests will substitute a body for Jesus or that someone will impersonate him.

This search and what happens changes Jeremiah’s life forever.