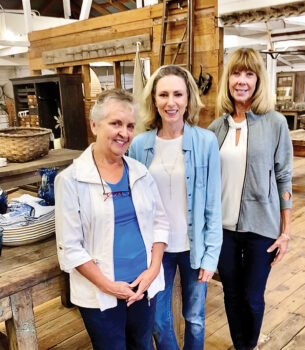 Thanks to a special donation from Robson resident Janelle Roth, the Robson Library now offers eleven titles in the New York Times and USA Today bestselling Kate Burkholder crime fiction series authored by Linda Castillo. The books are hardcover copies, and each is signed by the author. Currently on display in the library, the books are all available to check out right now!

Janelle’s donation comes to the library from her friend and former Robson resident, Doreen Greenhalgh, who moved to Texas Hill Country, where she is now the neighbor of Linda Castillo. Once again, we’re reminded of the interconnections of our relationships—it’s the “six degrees of separation” concept illustrated! And from this particular “connection,” the library has benefited greatly!

The Kate Burkholder series, first published in 2009, is set in the world of the Amish. In the sleepy rural town of Painters Mill, Ohio, the Amish and “English” residents have lived side by side for two centuries. But 16 years ago, a series of brutal murders shattered the peaceful farming community. Kate Burkholder, a young Amish girl, survived the terror of the Slaughterhouse Killer but came away from its brutality with the realization that she no longer belonged with the Amish. Now, a wealth of experience later, Kate has been asked to return to Painters Mill as Chief of Police. In these mystery thrillers, Kate must seek out the truth in a society of silence—and face some secrets of her own. The author, Linda Castillo, is the recipient of numerous industry awards.

Books 3 through 12 in the series—Breaking Silence, Gone Missing, Her Last Breath, The Dead Will Tell, After the Storm, Among the Wicked, Down a Dark Road, A Gathering of Secrets, Shamed, and Outsider—are now available at the Robson Library! (Currently, the Robson Library does not have books 1 and 2, Sworn to Silence and Pray for Silence, but those books are probably available from the Denton Public Library in print, digital, or audio format.) The thirteenth book in the series, Fallen, is due out in July 2021. (In addition to the book-length titles listed, the Kate Burkholder series also includes short stories and novellas, and the donation to the library includes the short story collection, A Simple Murder.)

In 2013, the first book of the series, Sworn to Silence, was adapted into a Lifetime original movie titled “An Amish Murder” starring Neve Campbell as Kate Burkholder.

Typically, due to limited shelving space, the Robson Library is only able to accept hardback books published within the past three years, but an exception was made for this donation, both to accommodate the near-completeness of the series and to highlight a popular Texas author. The books will be displayed in the library for a few weeks and then moved to a new Texas Authors shelf, located near the Robson Ranch Authors shelf. (Regarding donations, there is no publication date limit for paperbacks.)