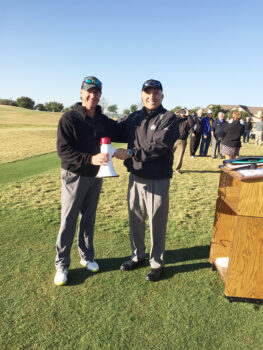 October was a landmark month for Wildhorse Golf Club. It saw the introduction of two new and especially welcomed golf assets… Craig Pullen, our new PGA Director of Golf, and the North course, our anxiously awaited and challenging new 9-hole addition.

Craig was personally selected by our most recent Golf Director, Roger Martinez, who returned to New Mexico to help with family issues and resume his career in residential real estate. We know Roger will continue experiencing the same high level of success he did here at the Ranch and wish him and his family all the success they deserve. Roger will be greatly missed! Craig, an experienced PGA professional, the same as Roger, joins us with a strong set of local golf successes at Stonebriar Country Club and most recently Oakmont Country Club.

The new greens are large, with skill testing rolling design that requires players to be especially careful with their approach shots’ landing locations. On top of that, the fact that they’re new makes reading putt speeds and direction a bit unpredictable. Taken as a whole, Wildhorse Golf Course’s new North nine holes is destined to become a very popular destination for Robson Ranch residents as well as close-by homeowners in Harvest and other new community developments.