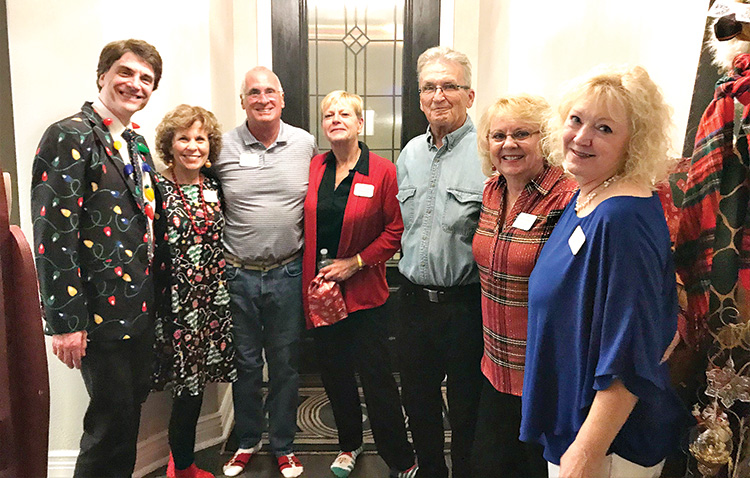 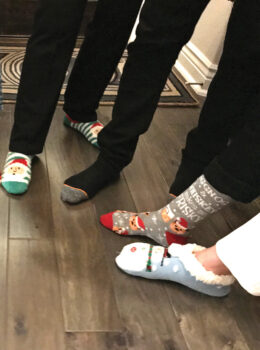 The monthly NxNW Dine Around club found the group not leaving the Ranch for December. All gathered on the Brant Way cul-de-sac at the home of Carrie and Dean Summers who graciously opened up their home to the event that is usually held at a restaurant outside the Ranch.

Attendance required a savory or sweet snack to share, a gift for the gift exchange and holiday socks (or not). The sock portion has now become a tradition for the neighborhood’s December event since last year’s gathering took place during one of those great Texas rain storms (all wet shoes, coats, and umbrellas were left in the garage so it was advised for all to make sure to wear socks).

For this year’s gathering, over 40 neighbors left their shoes at the front door, unveiled their goodies to oohs and aahs, filled their glasses or popped a top with a beverage, and secretly slid their gift in the pile for later fun. As sounds of laughter and conversations elevated the noise to levels that made many turn down their hearing aids, the neighbors didn’t even know they were being spied on by the sock judges. There were five different categories of socks being judged. As the judges worked the room, snacked on the goodies, engaged in casual conversation as well as work out the kinks in their necks from all the downward motion, winners were declared. Marc and Elaine Chapman, Sam and Annette Symonds, Jim Persons, Rita Mumaw, and Kay Pearce were each awarded a gift provided by our gracious host.

The gift exchange brought many more oohs and aahs. Attempts to hide your bounty were futile as what you were so excited to get was stolen and you had to watch the thief saunter off into the sunset with the standard “I am really sorry to do this to you” sentiment. It took a little time to get through all the gift giving and remember what number was next and keep the noise level down so all could hear and see what had been opened and was available to pounce on.

As the crowd started to thin out you could almost hear the Summer’s two-story Ashland breathe a sigh of relief and go into hibernation until next year, same time, same place, and, of course, filled with laughter and fellowship of neighbors, great fun, great food, and holiday socks.