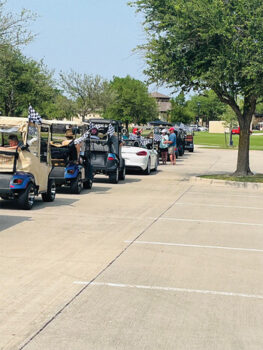 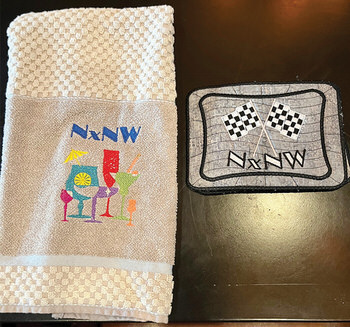 As you cruised the streets of Robson Ranch Texas on Saturday afternoon, May 21, you might have seen one of about 15 racing qualifiers go by in golf carts and automobiles equipped with checkered flags waving furiously in the wind and thinking to yourself, “Did I really see that?” Not to worry—you weren’t seeing things. It was just another fun and crazy outing for the neighbors on Osprey, Brant, Cinnamon, and Willet, who are known as NxNW and have a reputation for creating opportunities/events for a neighborhood get-together.

This is the second year for the NxNW Great American Road Rally. The drivers who were racing at Texas Motor Speedway at that same time and weekend had nothing on the NxNW drivers, as each entrant was given a map and page of clues. With their navigators seated close by, they raced to find the streets and the box that held the coveted number associated with that clue.

The winners of last year’s rally were Carrie and Dean Summers. For those who do not know, Carrie is a real estate agent here at the Ranch, so of course she knows every street here. Since she has such an advantage over the rest of us, Carrie oversaw doing the clues and putting the boxes on the street associated with that clue for this year’s rally.

Carrie put in some easy clues to build our confidence, then beat us down with some head scratchers. You might have seen golf carts coming to an abrupt halt and the occupants pulled over studying the maps, and possibly witnessed heated discussions on which way or where to go. Yikes!

All entrants checked in at the Grill at 6 p.m. to gather for drinks, a bite to eat, and get the coveted cards recorded. It ended up with two drivers receiving the checkered flag that found all 15 clues and were back before the 6 p.m. deadline. The winners were Marilyn and Gary Winters and Maria and Bruce Hillebrand. Third place went to Debbie and Gary Warrick. With the small entry fee collected, prizes of hand towels and coasters were given for first, second, and third place. All the prizes were hand embroidered by our newest member to the neighborhood, Eileen Boryan, who, upon her arrival to Robson Ranch, has been an active part of NxNW.

Here’s a couple clues from our clue master … where would these clues take you?

“It’s all Halloween colors as you run through the woods.”

“Who wouldn’t love to line the edge of their patio with this type of outdoor furniture?”

Look for your NxNW neighbors at the July 4th parade. We will be the group that has lined up our chairs on Ed Robson Boulevard, with the prime viewing location, with decorated golf carts, complete with brunch and cocktails!