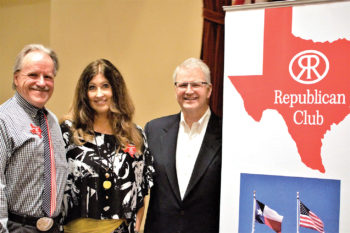 The Robson Ranch Republican Club held its “end of the season” Spring Banquet in May with special guest speaker, Republican Party of Texas Chairman, James Dickey. The evening began with a social hour and special background piano music by Rebecca Bafford. Giving the invocation was our incoming vice-president, Paul Vicalvi, and Terry Hitch led the pledges to the flags. The group also sang our National Anthem, accompanied by Ms. Bafford. A delicious Italian meal featuring lasagna and key lime pie for dessert was served, followed by a very informative and motivational talk from Chairman Dickey. He gave many statistics which showed the importance of getting out to vote, supporting local and state candidates and a brief update on recent legislative actions in Austin.

This meeting concludes the regular season for the Republican Club, as we take a summer break until September, when regular monthly meetings resume the first Wednesday evening of each month.

Our newly elected officers for next term are: Jim Linden, president; Paul Vicalvi, vice-president; Joyce Ambre, secretary (serving her second term) and Amy Enloe, treasurer. If you are interested in attending the Republican Club meetings starting again in September, please visit our Facebook page for more information or contact one of the officers.