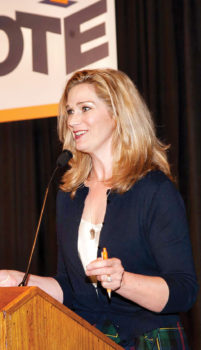 The Robson Ranch Republican Club is pleased to announce its speaker for the first regular meeting of the new season on Wednesday, September 6, at 6:30 p.m. Catherine Engelbrecht, founder of the non-profit group True the Vote (TTV), will share experiences their group recently encountered with the IRS in granting their 501(c)3 status. The ordeal made national headlines, which were carried on all the national news media outlets. Interviewed on many national TV news shows, Catherine explained how the IRS, under the previous administration, slow-walked the TTV application for 501(c)3 status although it was finally granted. She also testified before a Congressional subcommittee investigating the IRS. True the Vote organization is a non-partisan group dedicated to educating the public about voter fraud issues and how citizens can become engaged in monitoring the integrity of voting in their precincts. TTV is based in the Houston area but monitors voting activity nationwide and provides online resources to anyone interested in fair and honest voting and in eliminating voter fraud. Their website is: truethevote.org. All residents of Robson Ranch are invited to hear Catherine’s presentation on September 6. An informal social time will begin at 6:30 p.m. in the clubhouse followed by the regular meeting at 7:00 p.m.