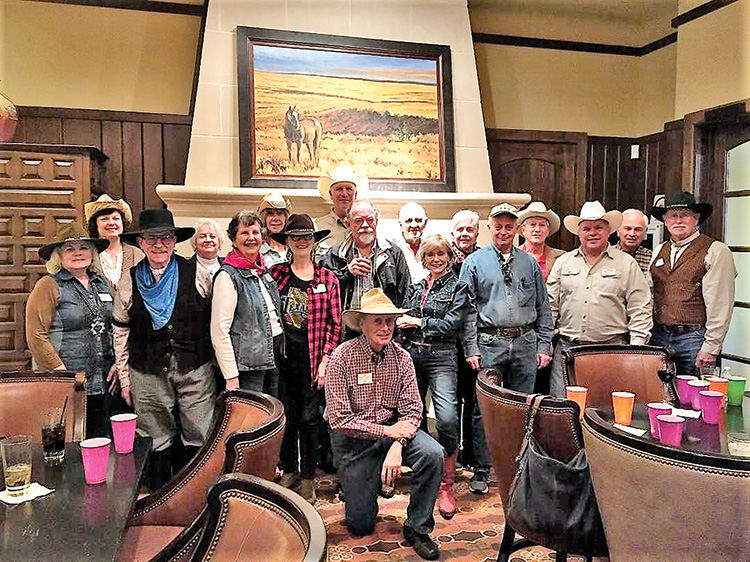 A lot of cowhands attended the post-event social! 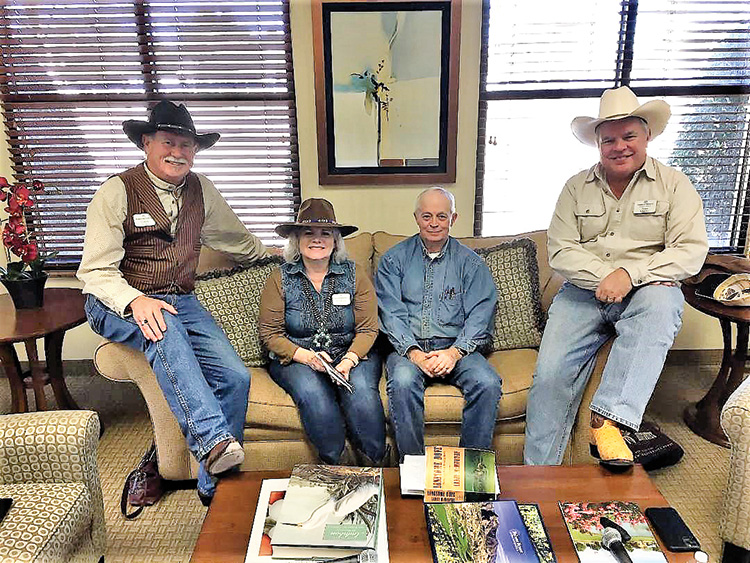 Why do we read? That was the thought-provoking question Lewis Toland posed at the Friends of the Library’s Lonesome Dove book discussion when kicking off our Celebration of the Old West on Feb. 27. He shared C. S. Lewis’ quote, “We read to know we are not alone.” Toland proceeded to offer his thoughts on the subject with the audience freely interspersing their opinions. Then the panel took the 68 attendees on a journey, transporting us to the American West of the 1870s. That, too, is another of the many reasons we read: to explore another place, another time—to see it through other eyes, to rub shoulders with characters, and inhabit an environment that we’ll never encounter.

The book’s time and place were hard. There were dangers of every kind, at every turn. Larry McMurtry portrayed the period brilliantly through larger than life characters—an unforgettable assortment of cowboy heroes and outlaws, whores and ladies, Indians, cattlemen, and settlers. One reference offered a telling analysis, “McMurtry seeks to strip away glorifying myths and show readers how the West was really won.”

During the discussion, Dave Parker offered his insights on the cowboy culture, sharing memorabilia from his great grandfather, who’s in the North Dakota Cowboy Hall of Fame. Of interest to many in the audience, Dave discussed the guns of the period. Susan Parker talked of a woman’s life at that time and indicated how few opportunities were available. As an example, Susan pointed out that wives were property of their husbands and that husbands could beat them as long as the stick met the legal requirements! Wow! Alan Albarran covered the adaptation of the book to the wildly successful 1989 television miniseries. The audience enjoyed learning the background on the making of the series by Motown Productions, headed by Suzanne de Passe. (Bet you didn’t know that!) Alan also discussed the various actors considered for the roles. Did you know Robert Duvall’s wife was the one who encouraged him to play Gus? (She’d read the book and knew that was the plum role.) Duvall won a Best Actor Golden Globe for his performance. In offering his thoughts, Lewis Toland contextualized the story.

If you missed Lonesome Dove, you missed an interesting and fun afternoon! Plan now for our next book discussion! We’ve chosen another book that transports the reader to another time, another place. Next up, on May 14, join us for a journey to Russia. Again, our book is a work of historical fiction, A Gentleman in Moscow by Amor Towles. The book opens on June 21, 1922, in Moscow, on the day Count Alexander Ilyich Rostov has been called before the People’s Court to receive his life sentence of confinement to the Metropol Hotel. We’ll talk about the Bolsheviks, Moscow, the hotel, and the impact of adjusting to restricted circumstances. A fun social will follow in the boardroom.