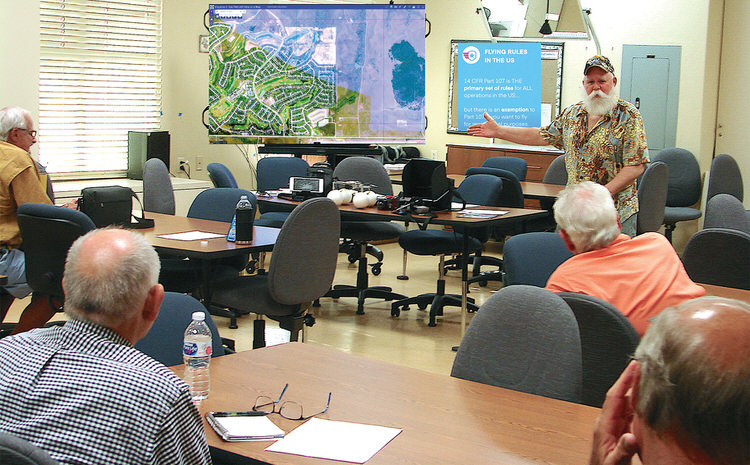 Speaker at the Drone SIG Group

The Robson Ranch Texas Drone Special Interest Group (SIG) meets the fourth Monday night of every month, other than August and December, from 7 to 8 p.m. in Room 104 of the Creative Arts and Technology Center (CATC). Since our meeting last month was on the cutoff day for Pioneer Press submission, a preview was presented and published in the August Pioneer Press. This is from the actual meeting. Before addressing the meeting, Dennis would like to recognize Rhett Hubbard, General Manager, for his aid that led to the recovery of Dennis’ drone that has been in the front gate pond since March 2, 2021, over five months. Amazingly, while the motors were corroded solid and the camera full of water, the video card in the drone was just fine and the flight video downloaded. The drone was recovered by a local SCUBA diver, coordinated by Rhett, cleaned and turned in for replacement by DJI, the drone company. Dennis has been unusually persistent in working to recover his drone and the saga will be covered in a future meeting.

We had a dozen people at the meeting with one loss when the announcement was incomplete, with no location. Dennis extended the information presented by Steve Simpson in the June meeting on the legal requirements from government agencies to fly here at Robson. They do vary in parts of the community that fall under the Denton Airport controlled airspace, seen shaded in blue over the portion of Robson on the screen. Note that new construction to the North will all fall under controlled airspace with more restrictions as the development extends toward the airport. Dennis added to the legal requirements with the physical requirements to prepare the drone and accessories, preparing yourself as a drone pilot, the courtesy to be shown to our neighbors, and tips to make each flight safe and successful. He handed out a 31-step checklist that covered items necessary, required, and nice to have, for a safe and legal drone flight. There was avid discussion with commercial and recreational pilots at the meeting. The rules vary a bit, but less as the FAA becomes more restrictive in controlling drone flight. Dennis worked his way through charging and updating the drone, controller, and all accessories. He discussed the paperwork that is required and what is good to have should questions arise. He suggested a flight plan of some sort be drawn out so all objectives of the flight would be met. Dennis found that he was forgetting video and camera settings and failing to take the photos he wanted without a map of the proposed flight with photo opportunities identified and changes in the drone controls and settings as they occurred in the flight. Having lost a drone in the pond and fortunate to recover the drone, Dennis is much more careful in flying and is happy to pass information gained through courses, videos, and talking with other pilots. The officers of the group do offer to mentor new pilots and help them learn to fly safely. The meeting was extended by additional questions and discussion. It seemed to be productive and worthwhile for those that attended.

Please join us at our monthly meetings. Visitors are welcome, even if you do not have a drone. We are happy to explain our preferences and experiences with accomplished pilots to those thinking of buying a drone. We try to display some of our photos and videos to illustrate our programs. Mentoring and “Buddy Flying” will help you become a safe and proficient flyer here at Robson.