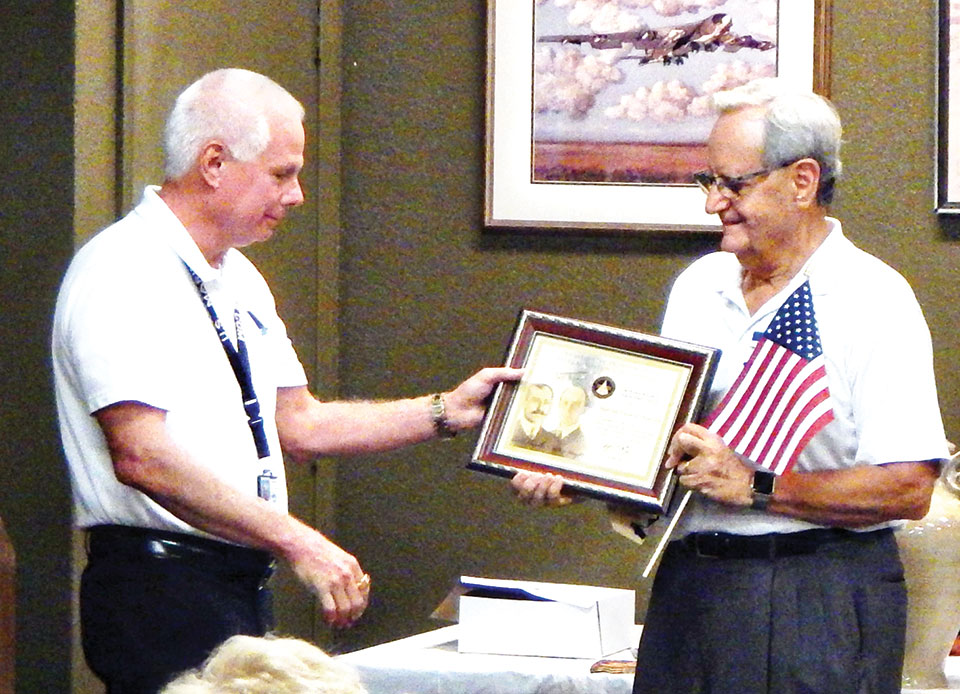 Standing in front of a T-34

Local pilot Harold (Hal) Watson who served in the Air Force for 26 years and continued flying corporate and civilian aircraft received the Federal Aviation Administration’s Wright Brothers Master Pilot Award. This award for pilots who have exhibited professionalism, skill and expertise for at least 50 continuous years was presented by Joseph Murphy of the FAA in a ceremony held in the Vintage Flying Museum.

Hal graduated from the USAF Academy and immediately entered pilot training and began his Air Force career flying the RF-4C in France, Vietnam and Germany. Those assignments were followed by assignments to the F-111F, A-10, A-37 and short-term checkouts in the F-5, F-15 and F-16. His staff assignments included the Joint Staff at the Pentagon and Chief of Safety for the Tactical Air Command. Military awards include the Distinguished Flying Cross, 14 Air Medals, Defense Distinguished Service Medal and three Legions of Merit. His last command assignments were as Wing Commander, 26th Composite Wing and the USAF Southern Air Division, both located in Panama.

Throughout his flying career he maintained the civilian pilot, instructor pilot and instrument instructor licenses for both single and multi-engine aircraft and currently holds the Air Transport Pilot license. He has accumulated more than 3,500 hours in USAF jet fighters and 4,000 hours in various civilian aircraft including experimental jet fighter-trainers.

His civilian jobs also included the aerospace industry as president of firms supplying fuel and services to the airlines at nearly a dozen international airports and building the jet bridges that allow passengers to access airliners. In addition he formed an aviation consulting company, BJAerospace LLC, that has contributed to modifying aircraft for the military and homeland security. He continues to provide sales, maintenance and flight consulting and services.

Harold and Bette (BJ) were married in the USAF Academy Chapel and have two sons, their wives and four grandchildren. Over the years she has been an integral part of their aviation endeavors. They have owned four aircraft that were “magic carpets” for their family. BJ actually flew before Hal when she was a flight attendant with Braniff Airlines. The FAA awarded her a pin in recognition of her aviation partnership with Hal.

Other Robson pilots also may qualify and can contact Hal for more information. Robson Ranch is well recognized as a community of retired military service people.