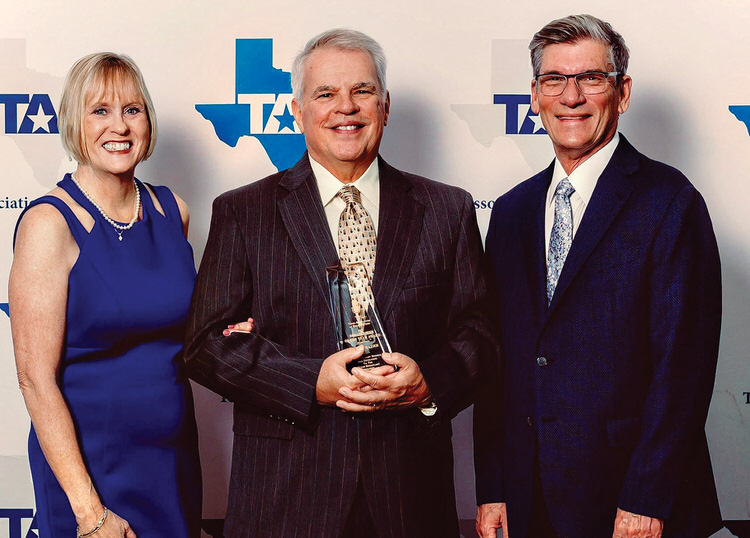 Dr. Alan B. Albarran, Professor Emeritus at the University of North Texas and a Robson Ranch resident, recently received the Educator of the Year Award from the Texas Association of Broadcasters (TAB). The award was presented at the TAB’s annual convention gala in Austin on Aug. 4, where he was introduced by Dan Halyburton, a longtime friend and broadcaster in the DFW area.

A former broadcaster, Dr. Albarran taught several generations of students at three different institutions during his career. His initial appointment was at Sam Houston State University in Huntsville, where he served from 1979 to 1987 and managed KSHU-FM. From 1987 to 1990, he was completing his doctorate at The Ohio State University. After graduation, he joined Southern Methodist University in Dallas where he served until 2000, finishing as an associate dean. In 2000 Alan was hired as Chair of the Department of Radio, Television and Film (now Media Arts) at UNT. He and his wife Beverly moved to Robson in November of 2005.

In 2007 Albarran received grants totaling $1.5 million to establish the Center for Spanish Language Media UNT, the first such entity in Texas devoted to training and research in this area. He served as director of the center until 2011 when he returned to the chair role for another four years. He stepped down from administration in 2015 and retired in 2018.

Over his career, Alan has authored and edited 15 books related to the management and economics of the media and communication industries. His book Management of Electronic and Digital Media, now in its 6th edition, is the longest continuously published media management book in the U.S., dating back to 1996. He has published numerous articles and book chapters and served 12 years as editor of two scholarly journals.

Internationally recognized as one of the leading scholars in his field, Alan has lectured and presented workshops in 18 different countries and served as Fulbright Senior Scholar. He has received many honors and awards but says, “Being recognized as the TAB Educator of the Year is a capstone to a wonderful career.” He is only the 11th Texas educator to receive the award.

At Robson, Alan keeps busy with exercise, oil painting, playing guitar, reading, and travel. He and his wife Beverly have been blessed with two daughters who have given them five grandchildren, affectionately known as “The Fab Five.”