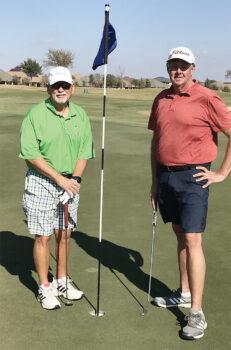 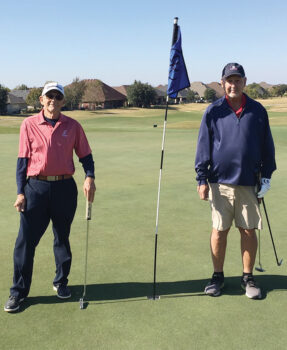 Congratulations to this year’s RRMGA Shootout Champions Doyle Hicks and Scott Lancaster. Doyle outlasted Ed Dorman for the White Tee Championship, when they tied on the last hole, and the champion was determined by a putt off. Ed went first and lagged a lengthy putt to within a foot of the cup, and Doyle then snuck his putt inside of Ed’s for the championship. On the Golf Tee Championship side, Scott Lancaster prevailed on the last hole with a gorgeous second shot into the 9th green, on the West Course to best Leroy Schuetts by one stroke. While the weather cooperated, the wind on the last few holes made things interesting.

The Shootout starts with 18 players teeing off from the White Tees, and 18 players from the Gold Tees. The two players from each Tee Box with the highest “net” score on that hole are eliminated. If there is a tie for elimination, there is a “chip off/putt off” where the “closest to the hole” stays to play another hole, while the loser is eliminated. Everyone who was eliminated stayed around to watch the drama and a good time was had by all. Tim Hughes, Tork Torkelson, and Steve Wardlaw, ran the Shootout with an assist by Kevin Buckrucker. Our thanks go out to them for a great event.

The Shootout is one of the last “big” events of the RRMGA golfing season before the holidays. The players who are eligible to participate in the Shootout are selected based upon the participation points they earned throughout the year at the Play Day events. Points are awarded each Play Day. If you are a member of the winning team that week, you receive four points.  Second place receives three points, third place receives two points, and all participants (no matter how they finish) are awarded one point. Play Day teams are chosen each week by a computer program that balances out the total handicaps on each team. At the end of the year, the top 18 point winners from each tee, White and Gold, are eligible to participate in the Shootout.

Membership in the RR Men’s Golf Association is open to all men at the Ranch. The Association sponsors weekly play day events and tournaments throughout the year. There are players of all skill levels and handicaps, so come on out and join the fun. Membership applications are available at the Pro Shop and online at www.RRMGA.com.