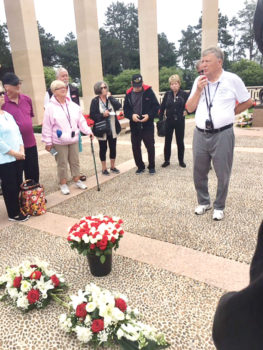 SOT President Mike Hoernemann delivers remarks to the 60 SOT travelers during the wreath laying ceremony. The roses in the foreground were later placed on individual graves by the members. 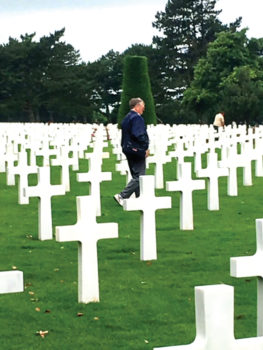 Thirteen Robson Ranch Texas residents and friends thoroughly enjoyed a late June visit to the June 6, 1942 D-Day landing beaches that stretch across 50 miles of coastline in Normandy, France. They joined with 48 Support Our Troops (SOT) members and friends from Robson Ranch Arizona. The SOT jointly sponsored trip had been planned and carried out through Ama Waterways, which has become the top-rated river cruise company in Europe. Ama offered SOT a special group rate that also included substantial donations to the respective SOT organizations. The trip package began with buses and a two-day guided tour of the Normandy beaches. It followed with a visit to Amsterdam and a seven-day luxury cruise up the Rhine River to Basel, Switzerland.

The highlight of the Normandy visit was a wreath-laying ceremony at the Memorial of the American Cemetery. The Memorial features a 22-foot statue, “The Spirit of American Youth Rising from the Waves,” and faces west towards America and the 9,387 headstones in the cemetery. SOT-Arizona President Steve Anderson presided over the ceremony, which included opening comments by SOT-Texas President Mike Hoernemann and closing thoughts and a prayer by Jim Gilbreath of the Texas contingent. There were also brief emotional comments by several SOT members who had fathers or other close relatives who were actual participants in the Normandy Operations.

The purpose of the wreath-laying was to honor the thousands of Americans whose lives were lost in the heavily opposed beach assaults and in the paratrooper drops further inland. Many more thousands of American lives were lost in the fierce German counter attacks and the Battle of Normandy that lasted until late August of 1944. In his opening comments, Mike Hoernemann noted that the amphibious invasion of Normandy was undoubtedly the largest, most complex military operation in all the wars of world history. The nature of warfare has changed since 1944, and it is highly unlikely that there could ever be a comparable single battle. However, there is one significant factor that has not changed. Of the many Americans who lost their lives at Normandy, many were still in their teens and a vast majority were under the age of 35. Unfortunately there are still wars going on today, and it is still young Americans and their families that bear the burden of protecting the rest of us. For a family who has lost a loved one in combat far from home, it really is no different to them if their relative was one of the thousands who died heroically on D-Day or died alone just last month in an attack in Afghanistan. Accordingly it is the continuing mission of SOT to provide for the material, physical and emotional needs of our all-volunteer military men and women and their families. The sacrifices made at Normandy are another reminder of the importance of what our organizations are all about.