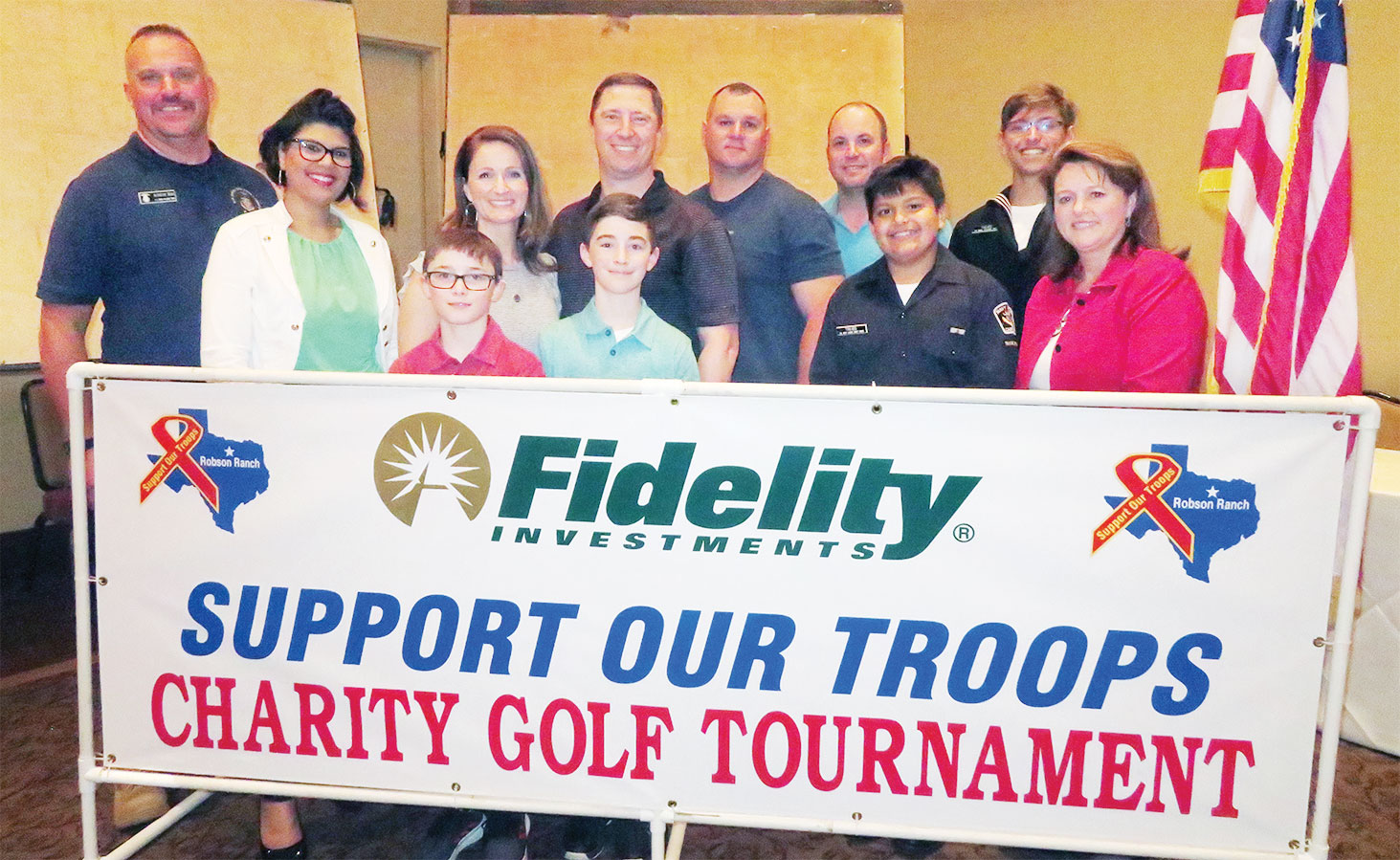 The 2019 edition of the Fidelity Support Our Troops charity golf tournament raised a near record $20,800. Pristine weather coupled with the generous support of our Robson Ranch community and area tournament sponsors made this year’s tournament one of the most successful ever. One hundred percent of every dollar donated to the SOT charity goes directly to supporting active-duty military men and women who serve and sacrifice so much for all of us.

The military honor dinner the night before the tournament was attended by several active duty military guests, their families and Robson Ranch residents who listened to guest speakers, Onisa Triebs, the branch manager of Title Sponsor Fidelity investments, SOT vice-president, Bill Moore and tournament chairman, Sam Goodrich. The honor dinner celebrates and honors those who sacrifice and serve to protect our homeland.

Friday morning turned out to be a spectacular weather day for the 125 tournament golfers and the 100-plus SOT volunteers who staffed the tournament site. At the conclusion of golf all participants attended the tournament luncheon where awards were given for individuals who had the longest drive, straightest drive and closest-to-the-pin as well as team awards for the best and worst scoring teams.

The SOT charity golf tournament is a unique partnership between Robson Corporation who pays for all military golf and meal expenses, numerous outside businesses, resident sponsors and donors, generous Robson Ranch residents who open their homes to military guests and a multitude of volunteers. 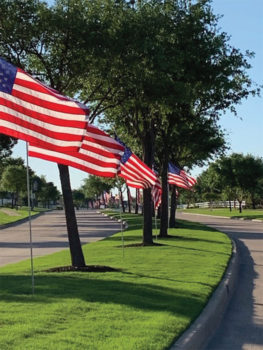 Flags fly on Robson Blvd. thanks to Support Our Troops

You’ve surely noticed the grand display of Old Glories on the median in Ed Robson Blvd. waving in the breeze on patriotic holidays. Did you ever wonder how they got there, who put them up? Perhaps you’d guess it’s the HOA, but you’d be wrong! The flags actually are purchased and displayed by the Support Our Troops (SOT) organization right here at the Ranch.

A dozen times each year, SOT volunteers meticulously place these flags to celebrate our country on various patriotic holidays. SOT also always honors those who have served in our county’s military on Memorial Day, and if you attended, you probably noticed the engraved bricks which comprise the courtyard in Veterans’ Park which honor specific military personnel. If you’d like to purchase a brick to memorialize a military person from your family, contact Darin Burk at [email protected]

Of course, later this summer comes our nation’s birthday on July 4. Each year, the parade gets bigger and better. Mike Sabo (262-0991) is looking for about 40 volunteers who can assist with parade organization in the morning and others who can carry banners and flags, as well as folks who would like to walk in the parade behind the SOT banner. The Argyle Young Men’s Service League has promised a drum line to complete our festive feeling. SOT member Jim Galbraith will be the parade Grand Marshall. Jim is a retired Lt. Commander after 23 years’ service in the Navy who is also active in Kiwanis and other Robson Ranch activities. So, if you’d like to show off your patriotism, plan to join the parade in your car, golf cart or even on foot as we say “Happy Birthday, America!”

Other recent SOT events included the 12th SOT Golf Tournament in April. Sam Goodrich reports that it was a huge success raising more than $20,000 for SOT’s military support projects. There were 125 golfers in the tournament including seven active duty members. Next year’s golf tournament will be on May 1, so put it on your 2020 calendar now!

The Vietnam Commemorative Pin is a way for Congress to salute those who fought during the Vietnam Era to promote peace and freedom. It is presented to service men and women who served in any capacity from 1955 to 1977. Sixteen men and women received Vietnam Commemorative Pins at our May meeting and dozens more have been presented at previous SOT meetings.

If you would like more information about our organization, please check out our website www.supportourtroopstexas.com or visit our monthly meeting on the second Monday each month at 1:00 p.m. in the clubhouse.