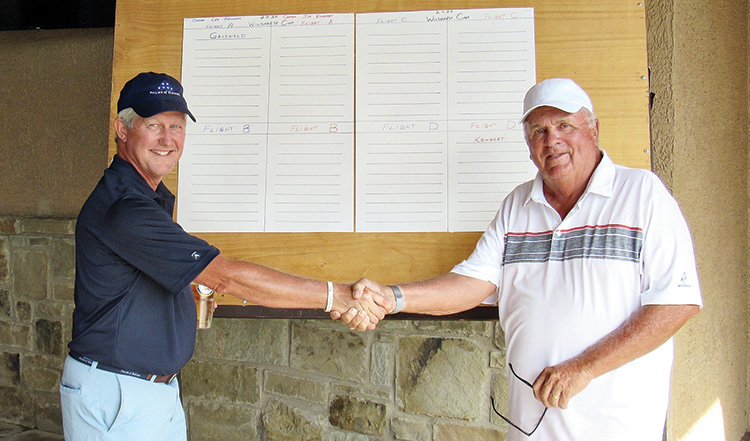 Lee Griswold and Jim Kohnert wish each other good fortune at the start of the Wildhorse Cup.

While the Ryder Cup may have been postponed this year, the drama and tension of match play was present the weekend of July 10 to 12 at Robson Ranch (RR). That weekend, 72 members of the Men’s Golf Association faced off in the three-day event modeled after the Ryder Cup, which is held every two years between the best golfers from Europe and the United States. Team Kohnert, playing under the Red Banner, shocked Team Griswold, playing under the Blue Banner 54 to 36. A great time was had by all.

The first day’s event was a Four Ball event with two-man teams. Each golfer plays his own ball and lowest score wins the hole. The total holes won at the end of 18 holes determines the winner. After day one, Team Kohnert had a slim one point lead, 9.5 to 8.5.

Day two’s events were Alternate Shot and Scramble formats. In the Alternate Shot format, players took turns hitting the ball from tee to green until the ball is holed. In the Scramble, each team member hits his own ball, but the best shot is chosen, and both team members take their next shot and so on from that location until the ball is holed. Again after day two the event was very close with the Red Team holding a slight two point lead 28 to 26 with 36 points available on day three when there would be 36 heads-up matches scheduled for Sunday.

On day three, following a rousing and awe-inspiring motivational speech by Captain Jim Kohnert, Team Red came out with putters blazing, and came away winning 26 of the 36 points available on Day three for the 54-36 victory.

The teams were chosen by the Captains, Lee Griswold, the President of the MGA and Jim Kohnert, the vice president, via a random draft from the 72 members who signed up to play. Handicaps were used to balance out skill levels. Following each day’s event, the participants gathered on the patio for lunch and some cold beer all while wearing masks where required and maintaining social distance. While everyone played to the best of their abilities, and some team members from both the Red and Blue teams turned in stellar performances, thanks and kudos need to go out to Tim Hughes and Larry Casazza for running the tournament, and thanks to the staff at the Wildhorse Grill for hosting the post-event festivities on the patio.

Membership in the RR Men’s Golf Association is open to all men at the Ranch. The Association sponsors weekly play day events and tournaments throughout the year. There are players of all skill levels and handicaps, so come on out and join the fun. Membership applications are available at the pro shop and online at www.rrmga.com.