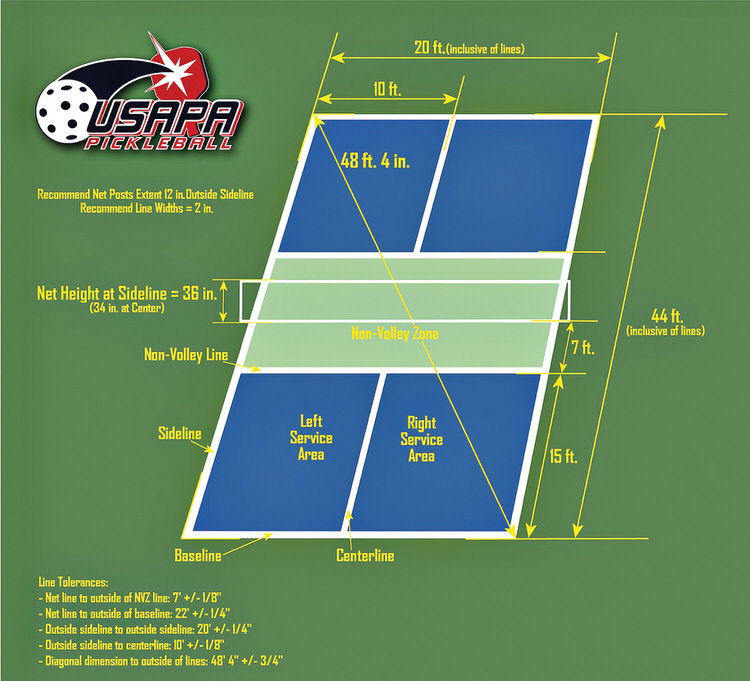 Standard pickleball court. Let’s talk about that middle section and why I seldom cook these days!

Every court game such as tennis, basketball, badminton, etc. has its own unique court markings and rules for those markings. Pickleball is no exception. It’s obvious even to a non-player that the outside lines mark where the ball would be considered in vs out. The vertical line dividing the back portion of the court is somewhat intuitive as being the serving target (similar to tennis). However, it’s not so obvious or intuitive what the horizontal line (running parallel to the net) means. That line is the subject of this article and an important aspect of the game.

The seven-foot section on each side of the net is technically called the Non-Volley Zone (NVZ). Non-volley means you cannot cross that line to hit the ball on the fly. New players are therefore taught early to be cautious not to cross the NVZ line, even with so much as a toe, to return a ball in flight. While NVZ is the technical name for this area, it is often referred to as The Kitchen. Theories abound as to why that nickname. It could be a borrowed term from Shuffleboard (Hmmm… Why doesn’t Robson have a Shuffleboard Club? … Ahh, but my mind wanders.) Back to the theories for calling it the Kitchen … it could be because it’s often hot or dangerous in the kitchen. Therefore, Stay Out of the Kitchen’ is a general way to remember to be cautious of where you are located when you return a shot on the fly (one that hasn’t bounced first). Personally, I took that warning to heart, and that’s why since I started playing pickleball, I seldom cook! I am doing a great job at “staying out of the kitchen,” lol.

The NVZ ensures that players can’t stand right up at the net and slam the ball down. It keeps the game from becoming too aggressive, but sure doesn’t take away from it being a competitive sport.

Can a player ever step into the NVZ/aka “Kitchen?” Absolutely! Once the ball has bounced, it is fine to step into the NVZ to return the shot. But then get back out quickly! Otherwise, you will be tempted to hit the next shot in the air while you are still in the NVZ.

More fun tidbits regarding the NVZ.

If you hit the ball on the fly from the main part of the court, where it is legal …

1. But your sunglasses, hat, etc. fall off and land in the kitchen, it’s as if you stepped into the kitchen too! Fault!

2. But your forward momentum takes you into the NVZ afterward, it’s as if you stepped into the NVZ! Fault!

3. And you are struggling to keep your momentum from taking you into the NVZ, it is legal for your partner to reach out and pull you back to prevent you from stepping over the line! Fault avoided!

So, it turns out you can step into the NVZ/Kitchen any time really, just as long as you don’t hit the ball on the fly while you are in it! The question is, once I understood that it’s okay to step into the kitchen, have I started cooking more often? Nah! I’m too busy enjoying the game as often as possible! Visit us at www.RRDPC.com.