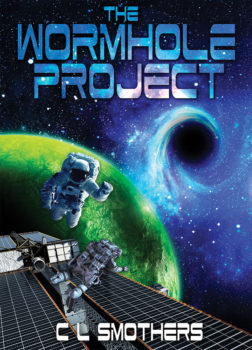 Robson Ranch’s own, CL Smothers, has written another book, The Wormhole Project.

What begins as a gift for humanity to explore the galaxy becomes a life and death struggle to complete the project and defeat terrorists who have a single objective — to steal the technology, develop a weapon of mass destruction and dominate the Earth.

A speculative high-risk project is undertaken to bend space-time and make interstellar travel feasible. Referred to as the Wormhole Project, it came to a screeching halt when the system became unstable killing twenty-two of the world’s greatest scientists. Congress immediately shut the project down, citing it as high risk and unmanageable.

Ten years later the National Science and Technology Agency (NSTA) convinces Congress to let them restart the project, claiming they have solutions to the previous issues and the technology is manageable. A recent Cal Tech graduate, Dr. Harry Stevenson, writes a brilliant thesis on wormhole theory. It captures the attention of his major professor, Scot Kimberly, who sends the thesis to the head of NSTA. Kimberly, a consultant to NSTA, convinces Dr. Bill Hart, NSTA’s Chief Scientist, to hire Harry as the program manager despite his youth and inexperience.

After three years of outstanding progress at the STL Labs in New Mexico with success seeming eminent, a mole infiltrates the project and creates mayhem by using smart AI viruses to sabotage the system disrupting the flights through the wormhole and killing many of Harry’s team members.

What starts out as a gift to allow humanity to explore the stars becomes a struggle to successfully complete the project and defeat terrorists who are sabotaging the project and stealing the technology to develop a weapon. In a final showdown, the United States is given 72 hours to surrender. Harry and Kala, a brilliant self-aware AI program, and his team become the last line of defense to defeat an indefensible and horrific weapon system and save America from total destruction.