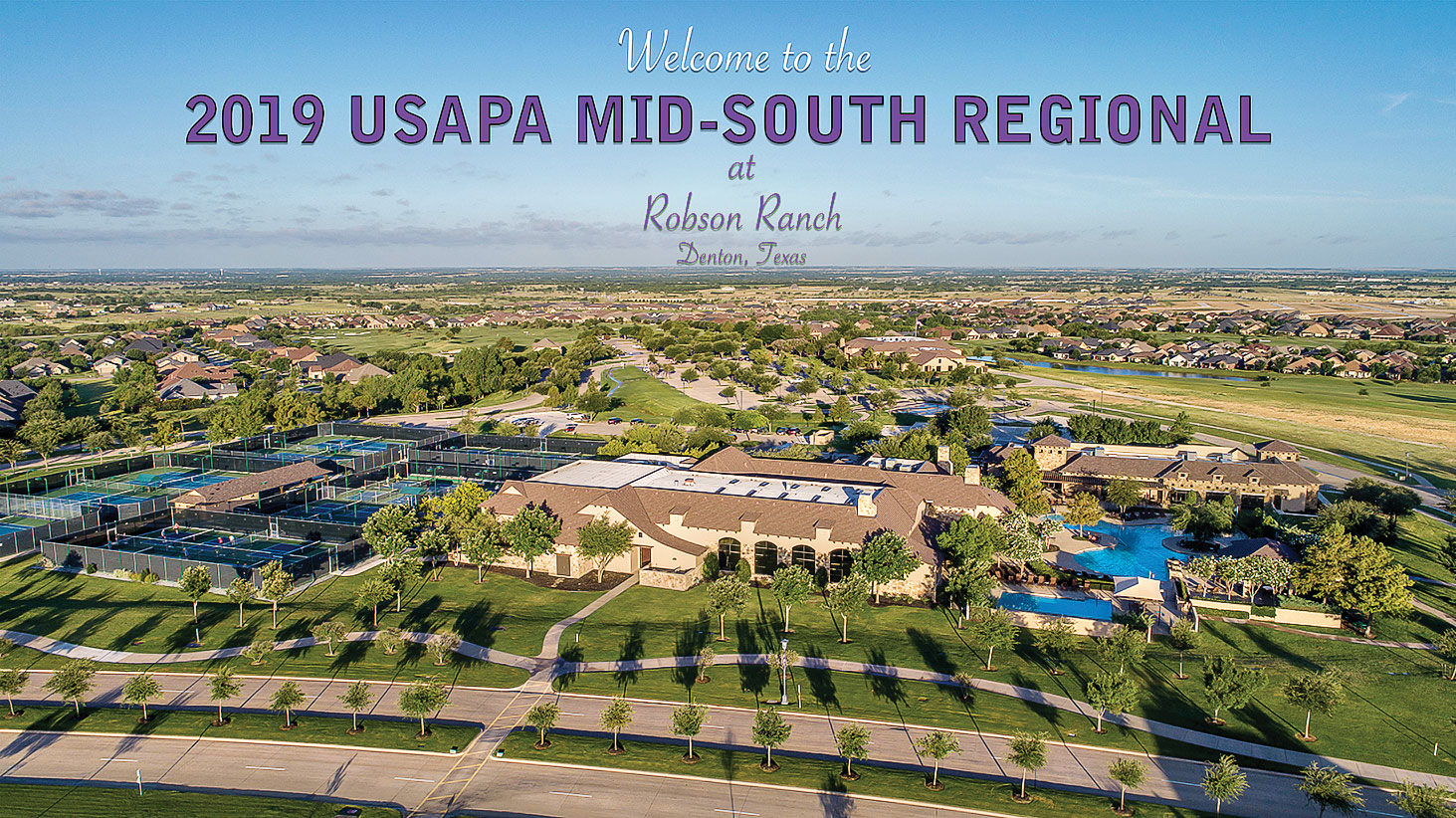 Robson Ranch Denton, Texas was the host site for the 2019 USAPA Mid-South Regional Tournament on March 29-31. The Ranch, as it is commonly known, has 16 permanent pickleball courts with six adjacent tennis courts that were set up as 24 additional temporary pickleball courts for a total of 40 courts. Thirty-two courts were used for competition and eight courts were used for warm-up and practice courts. To this date, it is believed that only the U.S. Open, USAPA Nationals and the USPAPA West Regional have had more courts set up for a tournament. There were a little over 600 players registered for the tournament, but by the time play began injuries and emergencies dropped the number competing to 598. Players attended from 37 states and three countries, including Canada and Mexico.

Tournament directors and operations staff decided due to the court arrangement, brackets scheduled and operations location, that it would be best to use the operations model used at the USAPA National tournament in 2018. The play courts were divided into two groups of 16, permanent and temporary, with 60+ and under 60 brackets played on each group. Using the split system in the software pickleballtournaments.com, allowed the operations staff to minimize the court/match turnaround to keep matches on schedule and reduce the fatigue on staff. Staff was scheduled to split the days and allow multiple persons to run the event and court desks. There were 1,073 matches played during the three days of competition averaging a little over 350 each day in the five events.

The tournament started with a practice day on Thursday that included a referee training session and a reception that night at the Clubhouse Ballroom. Special entertainment, a magician, was provided by Kid Davey, an ambassador from Arkansas. There were about 20 sponsors for this tournament that provided balls, goody bags, paddles, a net, player bags, and hats with a total of 44 raffle prizes from purchased raffle tickets. These were given away at noon on Sunday. At the reception, about 20 prizes were also given away at no charge to the players who paid $5 to attend. There were over 60 ambassadors in attendance at this tournament from both the Mid-South and around the country.

Weather became a major factor on Saturday, the mixed doubles day. A morning rain delayed the start by two hours. With players and volunteers both assisting the courts were dried with both equipment and towels. The 16 temporary courts were chalked and re-taped after drying. The taping was done in what is believed to be a record time of 28 minutes for 16 courts. Everyone got a role of tape and went to work and did a wonderful job. The wind gusted to 40 mph making play a new experience for many players. The matches were completed only one hour after the predicted schedule. All were glad to get the day completed.

A special thanks goes out to the over 100 volunteers that provided exceptional services to the players. Seventy-five were from the Ranch and another twenty-five were from the Mid-South region. There were about 150 that contributed by refereeing the matches. All were paid including the line judges. Tom Burkhart was the tournament director as usual. Tom is the longest tenured regional director of ambassadors in the USAPA and the Mid-South was the first and is the longest running regional tournament. Mark Kellam managed about 16 people in the operations tent and Bob and Irene Romagosa were the referee coordinators and were assisted by a number of volunteers as well. Chuck Flanagan and others did the match calls. A wonderful group of volunteers makes for a great tournament.

A link to the tournament gallery is below:

Again, thank you to all the players and volunteers who made the Mid-South Regional Tournament a huge success.